Bechet or Not, that is the Question?

A 20-year-old female with recurrent childhood ear infections, and reported history of recurrent oral, genital ulcerations and UTIs, presented as transfer from outside hospital with concern for Behcet syndrome. The patient initially had a 3-4-month history of fever, oral and genital ulcerations and worsening respiratory symptoms. She was initially treated at urgent care with antivirals and nitrofurantoin. She was later admitted to an outside hospital with worsening of aforementioned symptoms and ...

From April of 1992 through November of 2006 a moratorium existed in the USA prohibiting the use of silicone gel-filled breast implants for routine cosmetic enhancement. This mandate, implemented by the Food and Drug Administration (FDA), centered around escalating claims of device-related systemic illness affecting hundreds of thousands of recipients who had these devices placed in their bodies during the 1970's and the 1980's. Varied theories of disease causation were proposed by numerous resea...

Severe MTX (methotrexate) toxicity due to low dose MTX used in rheumatic diseases is rare but linked with a high mortality ranging from 13 to 44%. We analyzed 22 cases with a minimum toxicity of CTC (common toxicity criteria) grade 2, that were admitted to our hospital. We retrospectively analyzed epidemiological data, the weekly MTX dosage, renal function before and at the beginning of the adverse event, co-medication with influence on MTX toxicity or on renal function and potential other co-fa...

Muscle ultrasonography is an upcoming tool in the evaluation of neuromuscular disorders. It is easily applicable in multiple clinical settings, has no contraindications, and provides a cost-effective alternative to other imaging modalities such as MRI. However, a known disadvantage of ultrasound is its dependence on examiner expertise. Furthermore, the assessment of muscle quality is done mainly through an assessment of muscle echo intensity, which is affected by machine/system settings, hamperi...

Systemic lupus erythematosus (SLE) is a chronic inflammatory disease that has various manifestations among different populations. This study aims to provide an overview of medical pharmacological management that SLE population received immediately at time of diagnosis. This is a retrospective analysis using patients’ registry medical information system. All patients diagnosed with SLE were reviewed by accessing their medical records including pharmacy prescription and dispersions at the Royal ...

Rheumatic diseases can be a paraneoplastic syndrome for an occult neoplasia. Some syndromes are more characteristic than others. In this case report, we present a patient with musculoskeletal symptoms suggestive of both carcinomatous arthritis and polymyalgia rheumatica that was shown to have adenocarcinoma of the lung. The musculoskeletal symptoms accompanied the course of the disease, disappearing with the treatment and re-occurring when it relapsed. We present a 63-year-old male, native from ... 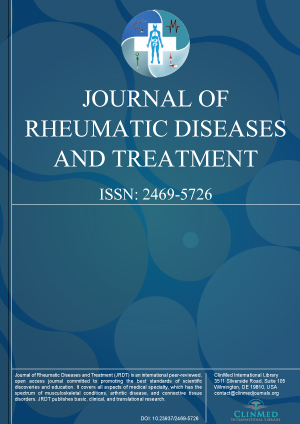