Home delivery is childbirth in a non-clinical setting that takes place in residence than in health institution. Globally, every day more than 800 women died due to complications during pregnancy or childbirth. In Ethiopia, few are known about the factors that affect women's place of delivery after utilization of antenatal care service. Therefore, the aim of this study was to assess the magnitude of home delivery and associated factors among antenatal care booked mothers in Delanta district, Nort...

Oncofertility: An Area of Reproductive Medicine Capable to Protect the Fertility of Cancer Patients

Cancer, also called malignant neoplasm, is a disorder which can be manifested in almost anywhere in the body as a result of errors in the cell cycle control machinery, resulting in the formation of tumors. Although the pursuit of a cure is still a top priority for cancer research, the concern about the side effects that the treatment of the disease can produce is an important factor that must be taken into account. One undesirable consequence is infertility, since patients are subordinate to the...

We characterize the evaluation and initial management of patients with vulvar pruritus, including elements of history-taking, physical examination, laboratory testing, and treatments. We propose an algorithm for approaching this common clinical problem in a systematic way. A retrospective chart review of patients with vulvar pruritus who presented to Gynecology or Vulvology Clinic at Parkland Health and Hospital System in 2012 informed this descriptive study....

Premenstrual syndrome (PMS) is a common disorder in adolescents in the reproductive age and share features with a number of psychiatric disorders. Moreover, it has a negative impact on emotions and their performances. Since many factors influence the development of this syndrome, we sought to examine and analyze the various social, behavioral, physical and psychological issues associated with PMS in this short review. Moreover, through this study, we recommend the need to have an effective healt...

Mothers and Pediatricians: Self-Power Versus Knowledge

Data collection was realized through a questionnaire sent to participants via e-mail and recorded the interview. A total of 200 mothers from a virtual community in the social network participated in the research. The answers were transcribed using the Discourse of the Collective Subject method. The analysis was supported by the qualitative research perspective, from the Social Representation Theory. The following categories were obtained through data analysis: (1) Being prepared to discuss pedia...

Neonatal and Maternal Short-Term Outcome after Emergency Caesarean Section in Comparison to Elective and Second Stage Caesareans: Results of A Retrospective 10-Year Survey

The aim was to compare the neonatal and maternal short-term outcome after an emergency caesarean to the outcome after an elective and after a second stage c-section. A possible impact of the weekday and time of the day as well as the incision-to-closure time within the overall collective and the decision-to-delivery time regarding emergency caesareans on neonatal and maternal outcomes was examined. In the majority of cases a decision-to-delivery time of 20 minutes in a clinic with Level I care i...

Insight into Audit Reports on the Causes of Maternal Deaths in Poor Health Settings: The Case of North Kivu Province in Democratic Republic of Congo

Maternal mortality is a major public health problem in the world and particularly in developing countries. Understanding the causes and responsibilities remain capital when action is needed by policymakers and practitioners or by caregivers. The objective was to analyze audit data reported on maternal deaths and highlight the major causes of mortality as well as responsibilities. We analyzed 48 cases of maternal deaths that were reported to the health information bureau of the province of North ...

The purpose of the present study was to investigate the frequency of getting such health screenings as breast self-examination among a group of women and to identify the role of health beliefs in predicting breast self-examination (BSE). The data were collected from a convenience sample of 225 women covered of the clinics in northwest of Tehran. The participants completed the demographic questions and Champion Health Beliefs Scale (CHBS) designed to measure patients' perception on breast self-ex...

The Pap smear is a reliable, inexpensive and effective screening test for cervical cancer; the second most common cancer among women worldwide. We aimed to determine women's knowledge, attitudes and practice towards Pap smear in women live at the northwest of Tehran city. This study, was carried out on 334 outpatient Iranian women in winter 2018. A questionnaire including demographic characteristics (10 questions), knowledge (10 questions), attitudes (5 questions) and practice (2 questions) towa...

Guidelines for Management of Analgesics after Caesarean Section: Cognitive Survey

The term puerperium is used to indicate a time span that varies from six to eight weeks after childbirth, necessary for the woman's body to return to the conditions it was in before the pregnancy. Independently of its actual duration, the puerperium is a very delicate phase of the woman's life, with possible physical and psychological implications. What characterises this period is also the experience of pain. It is therefore important that all health workers who follow the woman at this particu... 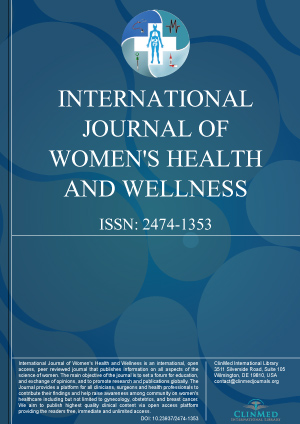