1Department of Pharmacology and Therapeutics, University of Ibadan, Ibadan, Nigeria

HIV/AIDS is one of the major public health concerns worldwide. The African region is the most affected worldwide, with Kenya being the joint sixth largest epidemic in the region. Kenya’s health system is characterized by donor reliance and donor concentration. As a result, key national strategic programs including HIV program are significantly funded by foreign aid. While the challenge of insufficient internal funding has relatively being cushioned by external support, Kenya’s transition from low income status to lower-middle-income status in 2015 has resulted to continued decline in donor funding. The recent stand-off between the United States agency (USAID) and the Kenyan government has further worsened the situation on account of concerns about mismanagement of funds by the Kenya Medical Supply Authority (KEMSA) and questionable tax policies. This situation has led to significant shortage of antiretroviral drugs in a subsector that is heavily dependent on donor funding, consequently posing significant threat to the lives of people who are dependent on the life-saving drugs. It is important for Kenyan government to implement well-planned strategies and informed decisions towards addressing acute shortages of HIV drugs in Kenya in order to prevent impending treatment failure and the emergence of drug resistance. This paper seeks to discuss the efforts and challenges faced in the fight against HIV in Kenya including potential challenges due to ARV drugsshortages. Thus, providing evidence for regional and global policymakers to take action on ARV shortage and foster sustainable solutions.

With an estimated 20.7 million people living with HIV (PLWH), east and southern Africa is the region most affected by HIV in the world [1]. This region constitutes the largest number of people living with HIV in the world. Kenya has the joint sixth-largest HIV epidemic in the world [2]. As a result, the country is regarded as a global target in sub-Saharan Africa to prevent the spread of HIV. In addition, Kenya constitutes the third-largest population of people living with HIV in sub-Saharan Africa [3]. The first index case of HIV in Kenya was identified in 1984. By the mid-1990s, the disease became one of the leading causes of illness in the country, exerting a significant burden on the country’s healthcare system and the economy. Six years after, 10% of Kenyan populations were living with HIV, albeit prevalence has reduced to almost half since then, standing at 5.9% by the end of 2015. This decline is due to the rapid increase in HIV treatment and care programs [4]. Similar to other countries in sub-Saharan Africa, Kenya is equally battling with the ordeal of ARV drug shortage. In 2019, an estimated 1.5 million Kenyans were living with HIV and about 42000 new HIV infections and 21000 AIDS-related deaths were reported [2]. Since the emergence of COVID-19, there has been a short supply of HIV medications, resulting in a significant decrease in access to Antiretroviral Therapy (ART) [5]. This challenge is further compounded by the hoarding of antiretroviral (ARV) drugs in Customs storage facilities due to a dispute between the donor organization and the Kenyan government [6]. This situation has left one and half a million Kenyans living with HIV at risk of complications and death from HIV. In this paper, we discuss the efforts and challenges faced in the fight against HIV in Kenya and potential challenges due to ARV drugs shortages. Thus, providing evidence for regional and global policymakers to take action on ARV shortage and foster sustainable solutions.

The Fight against HIV in Kenya

In recent years, Kenya has been the forerunner of HIV prevention as well as Voluntary Medical Male Circumcision (VMMC), pre-exposure prophylaxis (PrEP), and self-testing [2]. Kenya is remarked as one of sub-Saharan Africa’s frontrunners in terms of HIV prevention. The country has made ambitious efforts towards achieving the 90 90 90 targets. Since 2013 when 100,000 new HIV infections were recorded, there has been a steady annual decline with an estimated 62,000 new HIV infections in 2016 [7]. Significant improvements have been made with a more than 15% reduction in new HIV infections in 16 counties [4,8]. This improvement is largely driven by the National Agency for the Control of AIDS through the introduction of the Prevention Revolution Road Map in 2013, an initiative targeted towards ending new HIV infections by 2030. The Kenyan AIDS Strategic Framework (KASF) 2014-2019 was further introduced and targeted towards reducing new HIV infections by 75% through an integration of behavioural, biomedical, and structural interventions [8]. By the year 2020, 90% of all People Living with HIV (PLWH) already knew their HIV status, 82% of people diagnosed with HIV were receiving antiretroviral therapy and 92% of people receiving ART were virally suppressed [2].

Challenges in the Fight against HIV

While Kenya has achieved huge success in HIV and AIDS awareness, many PLWH faces high levels of stigma and discrimination which has resulted in poor access to HIV services [2]. In addition, Kenya's health system is faced with both donor reliance and donor concentration across sectors. Although the government allocates a financial budget for health programs each year, these funds are insufficient to meet the demand for comprehensive HIV prevention, care, and treatment in the country. The proportion of national budget allocated to health is still below national commitments while key national strategic programs such as HIV heavily rely on donor support. As a result, HIV response in Kenya is markedly funded by donors, such as the Global Fund and the United States President’s Emergency Fund for AIDS Relief (PEPFAR), which collectively contributes a great percentage of HIV programs in Kenya. PEPFAR is the key funder of the country’s HIV response, having contributed more than half of funds allocated for HIV/AIDS programs including more than 80% of finances from external sources since 2012 [9]. The Global Fund sponsors crucial but undercapitalized areas of the country’s HIV response, including HIV testing and counselling, ART services provision, care and support of chronic diseases, and Prevention of Mother to Child Transmission (PMTCT) among others [10]. Between the years 2001 and 2016, external funding constituted more than fifty percent of the government health expenditures, with a hundred percent recorded in 2005/2006 and 2009/2010 [11]. In 2017, four donors constituted almost 90% of health official development assistance [11]. While the challenge of inadequate internal funding has relatively being cushioned by external aid, Kenya’s reclassification from low income status to lower-middle-income status in 2015 has resulted in a decline in foreign aid. PEPFAR funding has reduced by nearly three-quarters from Sh17.3 billion in 2016 to Sh4.9 billion in 2019 [9]. Although this transition is expected to be a positive landmark, the country had since suffered a decline in health gains, with insufficient domestic funds to meet the demands of comprehensive HIV prevention, treatment, and care programs. Doubtless, the HIV response funding gap of $315.27 was reported in the 2015/2016 financial year [4]. As a result, PLWH in Kenya has continued to suffer limited access to free treatment services.

The recent stalemate between the United States agency (USAID) and the Kenyan government has further worsened the situation in a subsector that is heavily dependent on donor funding. Following a five years contract with Kenya Medical Supply Authority (KEMSA), the USAID agency contracted the Global Health Supply Chain, a procurement and supply management program implemented by Chemonics and other partner organizations to procure HIV, malaria, and family planning commodities for Kenya. According to Kenya health minister, Mutali Kagwe, USAID has decided to opt for an alternative HIV drug procurement and supply route due to trust issues arising from allegations of mismanagement of funds by KEMSA [5]. As a result, HIV drug supplies were held up at the port of Mombasa due to differences over importation taxes. Kenya’s tax policies allow tax waiver for government-to-government donations conveyed via relevant government institutions, as was the case of delivery of HIV drug consignment via KEMSA. However, the use of private institutions attracts payment taxes, as was the case of Chemonics [12]. In this case, the Kenyan government demanded Sh90 million ($832,000) importation taxes on ARV drugs before being allowed into the country, which USAID refused [13]. Although the taxes had since been waved following a public outburst over the government approach to the situation, the issue has created a shortfall in antiretroviral (ARV) drugs availability at the health facility level across counties. As a result, PLWH are only being prescribed a week supply of ARVs, contrary to the usual three to six months’ supply. This situation has a dire consequence on the one and half a million people living with HIV in Kenya. This calls for immediate strategies to ensure rapid scale-up of ARV drug distribution to health facilities across the 47 counties. This will help curb the impending surge of new cases of HIV infection.

The rationing of HIV drugs distribution across counties due to shortage has resulted in clinics receiving fewer supplies. As a consequence, PLWH has resorted to skipping doses due to a lack of funds to keep up with the frequent hospital visits. This weighs most heavily on children living with HIV who appear to be the hardest hit by the shortage of ARV medications. There is an absolute lack of HIV treatment and diagnostic reagents for children. The shortage of paediatric ARV drugs has forced parents and caregivers to crush adult tablets. This can lead to incorrect dosage, altered therapeutic outcomes, increase vulnerability to opportunistic infections, and HIV-related deaths among children. If this situation is not addressed immediately, there is a risk of reversal of many years of accomplishments in the fight against HIV in Kenya.

The shortage of HIV drugs is unacceptable due to the nature of ARV therapy for HIV. Therefore, it has become crucial for the government to implement well-planned strategies and informed decisions towards addressing acute shortages of HIV drugs in Kenya. Firstly, there is a need for the Kenyan government and the USAID to come to a consensus on who should distribute HIV drugs. This will facilitate adequate access to the life-saving drug and prevent the risk of transmission of HIV infections in vulnerable populations. Secondly, with Kenya’s reclassification to a middle-income country and the resulting decline in donor funding, the government needs to review the annual health budget and develop strategies to facilitate domestic financing for HIV treatment. This will reduce the country’s heavy reliance on foreign aid. Finally, there is a need to develop approaches to address health system inefficiencies. This approach will facilitate the integration of donor-supported HIV programs and balance multiple priorities.

The concept of this commentary was developed by OAA. The manuscript was drafted and prepared by OAA, OEO, AHO, OOD and HUA. OAA, HUA, BOO and JSK assisted with article interpretation and language edit. All authors have read and agreed to the final manuscript. 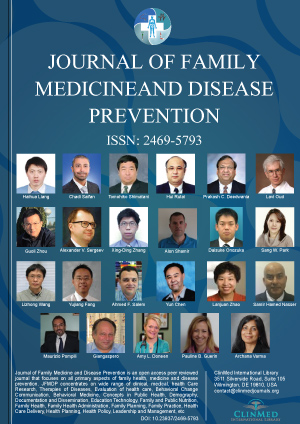 © 2022 Abimbola OA, et al. This is an open-access article distributed under the terms of the Creative Commons Attribution License, which permits unrestricted use, distribution, and reproduction in any medium, provided the original author and source are credited.