Splenic Hematoma as a Rare Complication of Endoscopic Retrograde Cholangiopancreatography

Splenic hematoma after endoscopic retrograde cholangiopancreatography (ERCP) is a rarely reported complication. We describe a patient who developed acute blood loss anemia after ERCP and was found to have a splenic hematoma. She recovered successfully with conservative non operative management. We describe the incidence, diagnosis, potential preventive strategies, as well as management of this rare complication.

Given persistent abdominal pain and possible biliary stricture, and after her dabigatran was held for 48 hours, she underwent endoscopic retrograde cholangiopancreatography (ERCP). A periampullary diverticulum was noted. Cholangiogram revealed a dilated CBD without clear filling defects (Figure 2). Sphincterotomy was performed, and a balloon sweep revealed the return of clear bile. Occlusion cholangiography performed at the end of the procedure was negative.

The following day, her hemoglobin was 5.7 g/dL (from 8.3 g/dL); this was confirmed on repeat labs (6.0 g/dL). Her vital signs remained stable without hematemesis or melena. International normalized ratio (INR) was 1.89. She received two units of packed red blood cells (PRBCs); post-transfusion hemoglobin was 8.2 g/dL. She had multiple non-bloody bowel movements over the next day. On post-procedure day three, her hemoglobin was 6.6 g/dL. Given stable vitals and no clinical evidence of gastrointestinal bleeding, she received two units of PRBCs, one 6 pack of platelets, desmopressin, and one unit of fresh frozen plasma (post-transfusion hemoglobin was 10.8 g/dL). A CT of the abdomen/pelvis revealed a grade 3 splenic laceration with intraparenchymal and subcapsular hematoma (Figure 3) with moderate peritoneal free fluid.

Given hemodynamic stability, appropriate response to transfusion, and no abdominal pain, she was managed conservatively. Serial serum hemoglobin over the next 24 hours were stable (8.9-9.7 g/dL) and remained stable over the next week (8.9-10.3 g/dL). Apixaban was restarted 13 days post-procedure.

Several well-described post ERCP complications include pancreatitis, bleeding, cardio-pulmonary complications and perforation, with the incidence of any one serious complication ranging from 0.1% to 3.5% [1]. Overall, there can be as high as a 5%-10% overall complication rate for an ERCP [2] and an overall mortality rate between 0.5%-1% [3]. Splenic injury as a complication of ERCP was initially described in the late 1980s [4]. There have been approximately 20 reported cases of post-ERCP splenic injury [3].

Diagnosis of a post-ERCP splenic injury is often delayed and is confirmed by cross sectional imaging [3,5,6]. The most likely mechanism is a traction injury along the greater curvature of the stomach. Risk factors include intra-abdominal adhesions, prior foregut surgery, chronic pancreatitis, and/or cirrhosis [7-10]. Traction injuries to the liver and transverse colon mesentery have also been rarely described after ERCP.6 Other possible mechanisms include the avulsion of splenic/short gastric vessels as well as what has been described as the "bowing" of the endoscope as it passes through to the duodenum, and the placing of the endoscope in the "long" position as the papilla is cannulated [5,7]. It has also been postulated that a prolonged procedure, such as during difficult biliary cannulation [9] could pose an increased risk due to increased pressure along the greater curvature of the stomach that places strain on the splenic capsule and the short gastric and splenic vessels [2].

There are few strategies that are effective in preventing this injury. Complication rates drop with increasing operator experience; high-volume endoscopists tend to have lower rates of all complications. Patient-specific risk factors, including the use of anticoagulants/pre-existing coagulopathy, may increase the risk of post-ERCP splenic injuries [2]. It has also been suggested that a sphincterotomy, which increases procedure time, may increase the risk of post-ERCP splenic injuries and bleeding [7]. In general, few maneuvers can prevent excess traction on the spleen; some have recommended external manual epigastric pressure to prevent loop formation of the endoscope in the stomach if duodenal intubation proves challenging [9].

Post-ERCP splenic injury is a rare complication that requires a high level of suspicion. Acute blood loss anemia in the absence of luminal bleeding and/or unexplained abdominal pain should prompt consideration for extra-luminal etiologies [5]. If a splenic injury has been identified, management follows commonly described algorithms for the management of blunt traumatic splenic injury, with management driven by the hemodynamic stability of the patient [3]. Conservative management is appropriate in the hemodynamically stable patient without signs of active extravasation on imaging and no clinical evidence of persistent bleeding.

Analysis and interpretation of the data: AKM, NJ, SKS, MMF 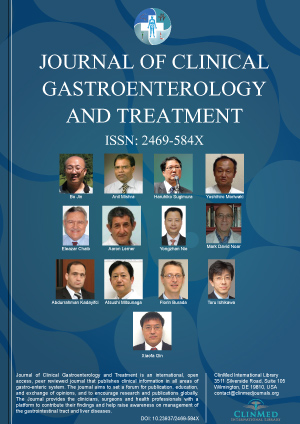 Journal of Clinical Gastroenterology and Treatment

© 2020 Bajwa KS, et al. This is an open-access article distributed under the terms of the Creative Commons Attribution License, which permits unrestricted use, distribution, and reproduction in any medium, provided the original author and source are credited.