#These authors (T.I. & D.A.S.) contributed equally to this work.

Amyotrophic Lateral Sclerosis (ALS) or Lou Gehrig's disease is a neurodegenerative and neuromuscular disorder characterized by a progressive death of motor neurons & motor paralysis that culminates in death, usually within 3-5 years of diagnosis from respiratory failure due to paralysis. Currently approved ALS therapies are not curative and fail to increase healthy lifespan. The worldwide prevalence of ALS is expected to increase by 69% over the next 25 years, yet its etiology remains scientifically unverified, complicating the discovery and development of effective therapies. Through this cross-sectional clinical study employing microbiological and cellular analyses of fecal and blood samples isolated from human patients with and without ALS, we achieved to confirm recently emerging pre-clinical and clinical evidence linking ALS with intestinal dysbiosis & systemic microbial infection, and thus provide rationale for future scientific investigations of intestinal dysbiosis as a potential therapeutic target for improving and extending the healthy lifespan of human patients diagnosed with ALS.

Amyotrophic Lateral Sclerosis (ALS) or Lou Gehrig's disease is a neurodegenerative disorder characterized by progressive degeneration of both upper and lower motor neurons, and manifests as progressive physical paralysis that culminates in death (most often due to respiratory failure) within an average of 3-5 years from disease onset [1-3]. ALS is the most common adult-onset motor neuron disease (MND), with a worldwide annual incidence of about 2 per 100,000 [4]. The worldwide prevalence of this fatal disease is expected to increase by up to 69% over the next 25 years [5]. ALS affects individuals of all races and ethnicities (both male and female); however, whites, males, non-Hispanics, individuals aged > 50 years, and those with a family history of ALS are more likely to develop this disease [6-8]. There is currently no cure for ALS, and its etiology remains elusive. The only 2 drugs approved by the FDA to treat this disease are riluzole (a glutamate inhibitor) and edaravone (an anti-oxidant), both of which fail to halt the progression of this disease and fail to consistently prolong healthy lifespan (healthspan) of ALS patients beyond several months. Thus, there is an urgent need for the ethical scientific discovery, development, and delivery of therapeutics that consistently extends the healthy lifespan (healthspan) of ALS patients beyond what is currently possible. The etiology of ALS has not been fully elucidated in the peer-reviewed scientific literature; however, evidence is emerging to indicate that disturbances in the intestinal microbiota are involved in the cause & progression of ALS and other neurodegenerative diseases [9]. Here, we provide clinical evidence linking intestinal dysbiosis & systemic microbial infection with ALS and discuss rationale for further scientific investigation of this link and it's potential as a therapeutic target.

Data from the blood and fecal analyses of 82 human patients were used in this retrospective cross-sectional study. The Steenblock Research Institute (SRI) & its Ethics Committee approved of this retrospective cross-sectional clinical study. All human patients were > 18 years of age & were able to provide informed consent. Of the 82 human patients included in this study, 54 (26 male & 28 female) were diagnosed with ALS per the revised El Escorial criteria, and 28 (14 male & 14 female) did not have ALS or ALS-related symptoms and served as a control group in this study. At the time of biological (blood and feces) sample collection & analyses, the mean age of human patients with ALS (ALS Patients) was 63.5 ± 12.3 years, and those without ALS (Non-ALS Patients) was 59.4 ± 13.4 years.

Differences between groups (ALS Patients vs. Non-ALS Patients) were determined by ANOVA with Student's t-test. Data are expressed as mean ± standard error of the mean (SEM). A P < 0.05 was considered as statistical significance.

Figure 2: Fecal carriage of one or more bacterial species was detected in 100% of the 54 Human ALS Patients in this study. View Figure 2

Intestinal dysbiosis is widely defined as an abnormal elevation in the concentration of pathogenic microbial species that reside within the intestinal lumen and has recently been associated with the etiology and progression of many neurodegenerative diseases [9]. Secretory immunoglobulin A (SIgA), an endogenous antimicrobial factor measurable in feces, is naturally found in the external secretions bathing mucosal surfaces of the intestine at a concentration that is positively proportional to the concentration of pathogenic microbial species that reside within the intestinal lumen [10]. This cross-sectional clinical study found that the mean concentration of fecal secretory immunoglobulin A (SIgA) is significantly higher (> 300%) in ALS Patients relative to Non-ALS Patients (Figure 1), thereby indicating that ALS Patients harbor a significantly higher concentration of pathogenic microbial species in their intestinal lumen and are thus in a state of intestinal dysbiosis. Furthermore, fecal carriage prevalence of one or more pathogenic bacterial species was confirmed in 100% of ALS Patients enrolled in this study (Figure 2). Among healthy human populations, fecal carriage prevalence of the pathogenic bacteria pseudomonas aeruginosa and salmonella spp is 8.2% and 2-3%, respectively [11-13]. However, in this study's population of ALS Patients, fecal carriage prevalence of pseudomonas aeruginosa and salmonella spp is found to be 83.3% and 66.7%, respectively (Figure 2), thereby indicating an increased susceptibility in the ALS Patients' intestine to harbor pathogenic bacterial species relative to that of healthy non-clinical populations. This study's finding of intestinal dysbiosis as a feature in ALS is in agreement with smaller cross-sectional clinical studies conducted in 2016 [14] and 2017 [15], both of which evaluated the intestinal microbiome of ALS Patients through different methodologies to confer status of intestinal dysbiosis.

The authors declare that the research was conducted in the absence of any commercial or ﬁnancial relationships that could be construed as a potential conﬂict of interest. Authors claim no conflicts of interest related to the research described in the manuscript. 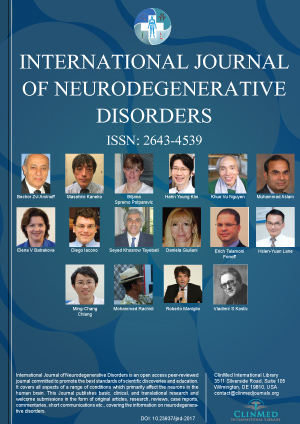 © 2018 Steenblock DA, et al. This is an open-access article distributed under the terms of the Creative Commons Attribution License, which permits unrestricted use, distribution, and reproduction in any medium, provided the original author and source are credited.