Results in Neurodevelopment after Open Cardiac Surgery in Pediatric Patients

Heart diseases are considered among the most frequent congenital malformations; they have a great impact on pediatric morbidity and mortality. Children with congenital heart disease present motor and neurocognitive deficits, as well as specific functions such as attention and executive functions can be affected.

It is an observational, analytical, retrospective, and cohort study, in which 10 postoperative cardiac surgery patients with the use of an extracorporeal pump were recruited regardless of the structural cardiac alteration they presented.

Table 1: Results in neurodevelopment with BSID-III in the composite score in the three areas of development. View Table 1

Table 2: Score of the Development Subscales with the BSID-III. View Table 2

It was shown that despite the test being performed at an average age of 8 months, 50% of the patients presented deterioration in neurodevelopment. It has been shown that the Bayley Child Development Scale is widely recommended as a test in the assessment of neurodevelopment, however it is not the only one that can be performed. It is important to follow up the patients at later ages since the alterations in the executive functions will be reflected and this will bring more evident alterations to learning in the school stage.

Heart disease is considered one of the most frequent congenital malformations and has a great impact on pediatric morbidity and mortality. For the present work, we used as the definition of congenital heart disease that of Mitchell, et al., which speaks of an evident structural abnormality of the heart or of the large intrathoracic vessels with a real or potential repercussion [1].

The prevalence reported worldwide ranges from 2.1 to 12.3 per 1000 newborns. In our country, its real prevalence is unknown, as a cause of infant death, it is ranked sixth in children under one year of age and as the third cause in children between one and four-years-old, based on the birth rate, it is estimates that around 10,000 to 12,000 children are born with some type of heart malformation [2].

Children with congenital heart disease present neurocognitive deficits that can be reflected not only in intelligence, specific functions such as attention and executive functions can be affected [3-5].

Other alterations that these patients present are attention deficit and hyperactivity disorders, this due to alterations in the development of the prefrontal cortex. Alterations such as dyslexia are conditions that are diagnosed after the reading period, around 4-5 years, however, the structures necessary for reading can show dysfunction from earlier stages [5,6].

The evolution of cognitive and psychomotor development in the group of patients undergoing extracorporeal cardiac surgery has been little studied, due to the variations in age at the time of surgery and the age of evaluation. Different study tools are necessary to determine developmental patterns in pediatric patients after cardiac surgery [1,4].

Surgical and non-surgical variables have been related to a poor prognosis in the development of neurological disorders. Variables such as neurological alterations prior to surgery, structural injury, low birth weight, postoperative complications, the use of profound hypothermia, as well as the long duration of circulatory arrest are some that should be taken into account when making a neurological evaluation in patients [4,7].

The Bayley Scales of Infant Development, currently in its third edition (BSID-III), is internationally recognized as one of the most comprehensive tools for the assessment of infants. It is widely used in research, clinical practice, and intervention evaluation as it assesses motor, cognitive and language areas are also subdivided into subscales in motor area (gross and fine) and language (receptive and expressive) [8]. The scale can be administered flexibly by making accommodations and modifications so that the succession and speed of the items presented to the child are adapted to a combination of factors such as age, temperament, and the success of the relationship. This scale is also useful in clinical, educational and research settings [8,9].

The hypothesis proposed in this study was that children undergoing cardiac surgery with extracorporeal pump present an evaluation of psychomotor development, measured by developmental scales corresponding to age, lower than that of the general population. The objective was to evaluate the neurodevelopmental outcome in those patients who underwent open heart surgery for congenital heart disease.

It is an observational, analytical, retrospective, and cohort study, in which 10 patients were recruited from the pediatric outpatient clinic of the Hospital Universitario ''Dr. José Eleuterio González'', after cardiac surgery with the use of an extracorporeal pump, regardless of cardiac structural alteration to present.

The selection criteria for this study included the following inclusion criteria: Pediatric patients undergoing extracorporeal cardiac surgery between 0 days of life and 48 months of life. The exclusion criteria were: Patients who present a genetic or chromosomal syndrome, patients who present malformation at the central nervous system level, premature patients < 36 weeks of gestation by assessment using the Capurro or Ballard scales, patients who have presented a neurological event or who have required advanced resuscitation maneuvers at some point in their life. The elimination criteria included were those patients with an incomplete medical history, incomplete record, or who died before the final evaluation was performed.

The research protocol of this work was approved by the Research Ethics Committee on March 6, 2019, granting a registration number PE19-00005.

A descriptive analysis was performed with measures of central tendency and dispersion, and the normality of the data was evaluated using the Komolgorov-Smirnov test. The Bayley III child development scale tests were evaluated using medians, as well as ranges and percentage for proportion of numbers of cases. The statistical analysis was performed using version 24 of the Statistical Package for Social Sciences (IBM SPSS Statistics Version 24, IBM Corporation 2015).

Information was collected from a total of 10 patients who met the inclusion and exclusion criteria, all of them underwent an assessment through the BSID-III which was 6 months after the surgical procedure.

Of the total sample, 5 patients were male and 5 female with a median age of 2 months in a minimum age range of 0.3 to a maximum of 17 months; mean weight at the time of surgery was 2.9 kg (minimum 2 kg and maximum 7.5 kg). Two patients out of the ten recruited required mechanical ventilation prior to the surgical event and these patients also presented a state of shock prior to the surgical procedure. Likewise, the different heart diseases presented by the study patients were analyzed. Great heterogeneity of heart disease was found, with atrial and ventricular septum defects the most common, as well as transposition of the great vessels, with 4/10 patients with atrial septal defect, 3/10 patients with ventricular septal defect, and 2/10 patients with transposition of the great vessels. Likewise, there were 3/10 patients with complex heart disease with univentricular physiology. Pre-surgical and hospital stay variables were also obtained, which are shown in Table 3.

Table 3: Demographic and morbidity variables prior to surgery. View Table 3

Regarding the surgery, the mean extracorporeal pump time in the patients was 152 ± 110.4 minutes and with a mean aortic clamping time of 87.2 ± 57 minutes. The 10 patients in the study presented postsurgical heart failure and one of them underwent ECMO therapy which remained for 72 hours under this therapy modality, did not have a shock state phase due to ECMO and had selective cerebral perfusion, so later came off ECMO therapy without complications. Three out of ten patients had the need for surgical reintervention due to the residual lesion they presented. In the pediatric intensive care area, an inotropic score was performed on the patients, which was 11.56 ± 8.4 points.

The patients who underwent the surgical procedure spent an average of 7.4 ± 7.3 days under mechanical ventilation, with a length of stay in the pediatric intensive care area of 15.6 ± 11.6 days and a total hospital stay of 40.1 ± 12.2 days (Table 4).

The study was able to demonstrate that patients with congenital heart disease who underwent cardiac surgery had neurodevelopmental alterations within a period of 6 months during which the evaluation was performed.

Three of the ten patients presented global neurodevelopmental alteration, a statistic similar to studies previously carried out by Sananes 2012 in which, through evaluation with BSID-III, it was shown that 30% of their sample had neurological development alteration.

The different areas of neurodevelopment were analyzed. It was found that alterations in motor development were presented more frequently compared to cognitive and language development, which, although they were also affected, not in the same proportion.

In the Starken 2015 study, which consisted of a meta-analysis with a total sample of 700 patients, it was shown that patients not only had cognitive alterations, but also that motor and visuospatial alterations are affected in 10% of patients purchased against a healthy control group with a significant p < 0.001.

Among the weaknesses of this study, it can be mentioned that currently in our country there are no reports on psychomotor development in this group of patients and it was not possible to have the support of literature within our geographical area, for this reason it was important to carry out this investigation. It is of utmost importance to recognize the developmental delay data as early as possible in order to provide our patients with timely rehabilitation therapy according to the affected area.

There are few studies that evaluate neurodevelopment in these patients in our country, most of the previous studies are carried out in tertiary centers in which the conditions of hospitals, as well as access to various drugs and intensive therapies allow patients have a better chance of development.

It was shown that despite the test being carried out at an average age of 8 months, 50% of the patients presented deterioration in neurodevelopment, while the remaining 50% had normal development, of the evaluated patients it was observed that the most commonly affected area in order of frequency was: Motor (the gross motor subscale was the one that was most affected), language and cognitive. The bibliography indicates that motor alterations are the ones that are usually affected in the first instance, because they are the first in development at an early age while language develops later, so their assessment at an early age is not very accuratein many of the cases if the corresponding tests are not applied.

It has been shown that BSID-III is widely recommended as a test in the assessment of neurodevelopment; however it is not the only one that can be performed. The ideal would be to have an evaluation before and after surgery, so it is important to follow up patients at a later age since the alterations in executive functions will be reflected and this will bring learning alterations with greater clarity in the school stage.

In patients who were found with alterations, they were sent to a rehabilitation center for early stimulation therapy to acquire in a timely manner the developmental milestones in which they were delayed. This is the importance of early evaluation in patients already it allows them to improve in a timely manner in deficient areas with appropriate therapy. 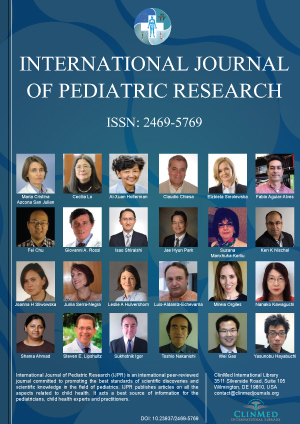 © 2020 Nieto-Sanjuanero A, et al. This is an open-access article distributed under the terms of the Creative Commons Attribution License, which permits unrestricted use, distribution, and reproduction in any medium, provided the original author and source are credited.