Splenic Infarction (SI) is a rare event that occurs when the Splenic Artery (SA) or its branches become occluded by embolus or by in situ thrombosis [1]. Most SI events are a result of embolic sources either cardiac or aortic. However malignant hematological disorders and autoimmune diseases are the predominant causes of splenic thrombosis [2]. Massive Splenic Infarction (MSI) results from compromised blood flow to more than half of the spleen [3]. In this paper we describe a case of a previously healthy patient who presented with pneumococcal sepsis who upon investigation revealed an unknown celiac disease and a MSI.

A 57-year-old woman entered the Emergency Department (ED) with 48 hours of worsening right leg pain, lethargy and fever. Her past medical history included a Mitral Valve Prolapse (MVP). In the ED she was febrile, lethargic, the pupils were equal and reactive with no abnormalities on neurological examination. Her vital signs were as follows: Blood Pressure (BP) 60/40 mmHg, Heart Rate (HR) 103 beats/min, temperature 38.6 ℃, Respiratory Rate (RR) of 18/min, and pulse oximetry of 96% on room air. The physical exam showed clear lung sounds to auscultation, tachycardic heart rate with regular rhythm without murmur, the abdomen was distended and diffusely tender without guarding or rebound.

Because of refractory hypotension even after provision of 3 liters of intravenous crystalloid, the patient was treated with vasopressor support with norepinephrine for maintenance of adequate blood pressure. The patient was then transferred to the Intensive Care Unit (ICU) for further evaluation and management. Because of progressive respiratory failure, the patient underwent Helmet Non Invasive Ventilation (H-NIV): Arterial Blood Gas (ABGs) PH 7.32, pCO2 59, pO2 61, HCO3 27 (FiO2 0.30). Further laboratory exams performed in ICU showed an increase of D-Dimer 3500 mg/dl (normal values 150-400), Lactate Dehydrogenase (LDH) 994 U/l (135-214), Total Bilirubin 3.63 mg/dl, Direct Bilirubin 3.16 mg/dl and a reduction of Fibrinogen 52 mg/dl, consistent with the diagnosis on Disseminated Intravascular Coagulation (DIC). The patient continued to receive parenteral fluid therapy, vasopressor support with norepinephrine, and also empiric antibiotic therapy with amoxicillin/clavulanate and levofloxacin. Further work up on the second day of hospitalisation showed a drop in platelet count to (PLT) 4 × 109/liter with hematuria. For this reason the patient received a transfusion of platelet concentrates (PC) and fresh frozen plasma (FFP).

From the day of admission she presented an erythematosus macular rash initially petechiae-like which then evolved to a purpuric rash with cutaneous vesicles and rapidly progressed to purpura fulminans. The lesions were extended to the upper and the lower limbs, the nose, the cheeks and the abdominal region. The blood cultures were positive for streptococcus pneumonia and the antibiogram revealed that this bacterium was sensitive to the therapy the patient was receiving with amoxicillin/clavulanate. After twelve days in ICU, she became clinically stable and was transferred to the Internal Medicine Department. Here she underwent an abdominal ultrasound, followed by Doppler echo with contrast agent. This test revealed a complete loss of splenic perfusion which suggested a massive infarction (Figure 1) confirmed also by abdominal CT with contrast material (Figure 2). She was treated with anticoagulant subcutaneous enoxaparin at the dose of 100 U/kg/day. In the following days the patient was febrile and required a surgical and infectious disease consultation. It was then decided to perform further investigations and continue with the antibiotic therapy.

Transthoracic echocardiogram (TTE) demonstrated a vegetation on the mitral valve, not showed by a former ICU examination, confirmed by a trans-esophageal echocardiogram (TEE). A new specimen of blood culture was negative for bacterial growth so we supposed that a previous pneumococcal spreading during the acute phase of sepsis caused the endocardial colonisation of the mitral valve. The patient also underwent Positron Emission Tomography (PET) with the glucose analogue 2-[18F]ﬂuoro-2-deoxy-D-glucose(18F-FDG) which did not detect any inﬂammation or infection. We investigated the possible causes of the pneumococcal sepsis and we found in particular a positive serology markers for anti-gliadin and anti-endomysial antibodies. Upper GI endoscopy showed loss of Kerckring folds in the descending duodenum and the histopathology revealed complete villous atrophy. Based on the above findings, we suspected a celiac disease and the patient started to follow a gluten-free diet and receive vitamins. Antibiotic treatment was continued for 15 days after the last negative blood culture.

In the following days, laboratory exams showed a progressive reduction of the inflammatory parameters as WBC and RCP. The spleen, periodically evaluated by abdominal ultrasound with contrast agent, remained unperfused and progressively reduced its volume as demonstrated also by an abdominal TC with contrast material (Figure 3a and Figure 3b). The patient was discharged and was recommended to undergo vaccination for capsulated organisms. After four months of follow-up she was clinically stable. Protein C, protein S and antithrombin III levels, anti-cardiolipin antibodies immunoglobulin (Ig) G and IgM, lupus anticoagulant, homocysteine, Leiden, JAK 2 gene v617f mutation and prothrombin gene mutation were normal. Abdominal ultrasound showed a further reduction of the spleen volume without any complications.

Figure 3B: An abdominal TC with contrast material. View Figure 3B

SI is a result of parenchymal ischemia and tissue necrosis due to the occlusion of one or more branches of the splenic artery [4,5]. The spleen, that has a rich vascular supply (5% of the Cardiac Output), is vulnerable to infarction because of the lack of collateral circulation between the artery branches. SI may develop secondary to cardiovascular disorders as atrial fibrillation, ventricular aneurism and heart valve diseases. Other etiological non-cardiovascular disorders are hematological diseases, thrombotic diseases, collagen tissue diseases, trauma, abdominal surgery or infection [6]. The predominant symptom is abdominal pain, sometime acute and severe, located in the left upper quadrant associated with fever and vomiting. The laboratory exams may show an increased serum Lactate Dehydrogenase (LDH) and WBC.

In this case report we describe a patient admitted to ICU because of pneumococcal septic shock who developed MSI. The investigations carried out at the admission, did not identify the site of the primary source of the infection [7]. During the hospitalisation, were viewed those diseases that predispose to pneumococcal sepsis and we found an unknown Celiac Disease (CD). In CD there is an impairment of the immune function of the spleen, called Functional Hyposplenism (FH). This causes a reduced number of IgM memory B-lymphocytes and defective activity of opsonising molecules (tuftsin, properdin) which participate at the immunity response against the encapsulated microorganisms [8-10]. The clinical manifestations of septic syndrome in patients with FH are: A massive bacteremia caused by encapsulated microorganisms, no obvious primary source of infection, a rapid onset of symptoms, septic shock accompanied by disseminated intravascular coagulopathy and a mortality rates of 50-70% [11].

The study of the spleen by abdominal echo-colour Doppler with contrast agent and then by abdominal CT, revealed a complete loss of vascular signal as described in MSI [12,13]. As mentioned before, among the causes of SI, the cardiovascular events are the most frequent. For this reason the patient underwent trans-esophageal echocardiogram that revealed a mitral valve endocarditis. In the setting of left side infective endocarditis (IE), SI occurs in about 40% of the patients and it is estimated that only 5% of cases will develop a splenic abscess [14]. Differentiation of abscess from infarction is difficult. Ongoing sepsis and recurrent positive blood cultures, which respond poorly to antibiotic therapy alone, are more typical for abscess [15]. During the hospitalisation, the patient was febrile for a long time, but after starting the antibiotic treatment ,blood cultures were repeatedly negative. The spleen was periodically investigated with abdominal echo-colour Doppler with contrast agent that revealed absolute lack of vascular signal and progressive volume reduction.

PET with the glucose analogue 2-[18F]ﬂuoro-2-deoxy-D-glucose (18F-FDG) did not detect any inﬂammation or infection. On the basis of these results we did not perform splenectomy. SI alone is not an indication for surgery, but the complication such as infection, rupture or chronic pain are indications for surgery [16]. MSI in this patient may be due to concurrent mechanism that act in a synergistic manner. The disseminated intravascular coagulation occurred during sepsis could determine a systemic activation of blood coagulation resulting in a small vessels thrombosis [17,18]. This condition could increase the ischemic effect created via splenic artery occlusion by embolised vegetation from the mitral valve. The patient was treated with parenteral anticoagulation during the entire course of her hospital stay. She finally was discharged after two months of hospitalisation in a clinically stable condition and was recommended close follow-ups. An echo-color Doppler with contrast agent performed three months later, showed a further reduction of splenic volume without signs of abscesses or rupture.

In conclusion we would like to emphasise that in patients with a massive bacteremia caused by encapsulated microorganisms and no obvious primary source of infection, it may be useful to investigate and test for a potential disease causing a functional hyposplenism, sometimes discovered in adulthood as for the patient we described in this report [19,20]. In addition, Echo-color Doppler with contrast agent is a useful tool for a diagnosis and follow up of patients with SI. This test can be performed on patients' beds and it is particularly useful for not transportable ICU patients [21]. 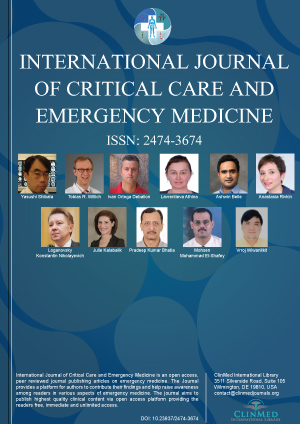 © 2019 Graziani A, et al. This is an open-access article distributed under the terms of the Creative Commons Attribution License, which permits unrestricted use, distribution, and reproduction in any medium, provided the original author and source are credited.