Child Mortality: A Comparative Study of Some Developing Countries in the World

According to the United Nations Sustainable Development Goals, countries all over the world are expected to create a healthy living environment for the populace most especially the vulnerable population of which children are examples. Despite the reducing trend in the under-five mortality rate in some developing nations, some nations still have a high record of under-five mortality.

This study adopted the use of a One-way Analysis of Variance (ANOVA) to evaluate any significant difference in the under-five mortality rate of five major developing countries namely Brazil, Bangladesh, Turkey, South Africa and Nigeria owing to their similarity in economy potentials and population. The significant level of 0.05 was considered for the statistical test. The under-five mortality rate figures were secondary data obtained from the UNICEF database for the period between 1990 through 2017.

The study on the vulnerable population has continued to remain an important research theme in both health and social economic researches. Children remain one of the important constituents of the vulnerable population. According to the 2017 World Bank report on population growth, there are about 1,953 billion people between ages 0-14 years accounting for 26% of the global population [1]. Even though there is a reported demographic shift that is increasing the aged 65 + cohort, the ages 0-14 years cohort is facing an increasing risk with an estimated decline to 21% of the global population by 2050.

Child mortality is a central case study among many researchers that revolves around children health outcome. Hence, different national and international stakeholders, as well as policymakers, continually strive to see to the global reduction of childhood deaths worldwide. It is also in this vein the United Nations (UN) developed the United Nations Development Goals (MDGs) which was later revamped into the Sustainable Development Goals with the number three (3) agenda still prominently dedicated to improving maternal and child health [2]. Though considerable milestone progress has been made in regards to reducing child mortality rate globally, however, the rate is still higher in Southern Asia and Sub-Saharan Africa with an average of 4 dead cases among every 5 deaths of children before their 5th year birthday [3,4].

There are several factors that are responsible for child mortality. Ria, et al. [9] in their study on causes and contributors to infant mortality in North India identified social and verbal autopsy drivers as a major contributor to child death. The social autopsy borders on social, health models and behavioral agents. These include factors stemming from transportations, living conditions of people as well as health systems that are operational. According to Suwal [10], malaria, malnutrition,diarrhea, and respiratory infections are major risk factors responsible for children fatality. Regarding neonatal death, Adeyele and Ofoegbu [11] posited that genetically propelled malfunctions, measure, and level of antennal care support, and quality of postpartum treatments play a role in the morbidity and mortality of children. Other factors responsible for child mortality include maternal literacy level, poverty, early marriage, place of abode, pneumonia, congenital abnormalities, preterm birth complications, nutritional and breastfeeding practices, access to medic care support, food insecurity, early pregnancy, poor hygiene practices, poor water access and so on [12-14].

The One-way Analysis of Variance (ANOVA) statistical methodology was adopted in this study. InVivoStat statistical software which was based on an r-programming language was used in the analysis of this study. ANOVA is multiple comparisons and parametric method used to test a mean effect difference for more than two groups. It could be considered as an advanced extension of the t-test independent sample distribution. Originally invented by Sir Ronald A. Fisher; a versatile and renowned Statistician to investigate treatment effects in agricultural experiments, the method is now widely used in Economics, Medicine and social sciences field [16]. This statistical methodology assumes that observations sets under consideration are independent, normally distributed and the condition of homogeneity of variance (equal variance) is satisfied [17,18]. This method generally seeks to test the null hypothesis that:

The linear model for the One-way ANOVA is given as follows:

The "I" entails the group membership while the "j" subscript denotes class membership (from the value of 1 to n). The Xij is equal to three distinct components namely; the overall mean of the experimental units(µ), a group classification deviation (αi) and the random effect (eij). The ANOVA makes a comparison of the variation between samples (Sum of squares for groups: SSB) relative to the variation within samples (sum of squares for Error: SSE).

Mathematically, the equation for the one-way ANOVA can be stated as follows:

The following degrees of freedom namely n-1, 1, and n-2 are associated with the SSTO, SSR, and SSE respectively.

In general, the Table 1 below gives a summary of the One-way ANOVA F-test

The p-value is derived when the comparison of the F Cal is made with the F-distribution table with their appropriate degrees of freedom. If the null hypothesis is rejected, a post-hoc test is required to determine a pair of groups that are responsible for the test significance. The Tukey's method, Bonferroni's and Scheffe's tests are some of the common ANOVA post-hoc tests [19].

The normality test using the Shapiro Wilk statistic shown that the under-five mortality rate of the countries is normally distributed (p > 0.05). This normality property of the data can be visualized as indicated in Figure 3 below.

Table 3 gave the F statistic of the ANOVA distribution. Since the p-value < 0.0001, it show that the ANOVA model is significant which entails that the means of the under-five mortality of at least a pair of the countries under evaluation are significantly different.

Thus, a post-hoc test using the Tukey's Method will be used to further evaluate this significant difference as a result of not accepting the null hypothesis of equal means the under-five mortality rate of the countries. 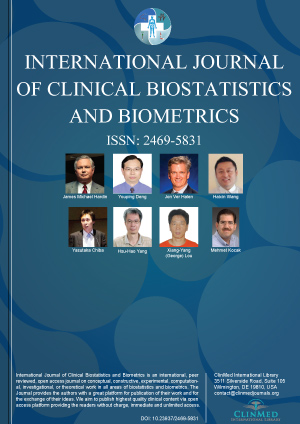 © 2019 Etikan I, et al. This is an open-access article distributed under the terms of the Creative Commons Attribution License, which permits unrestricted use, distribution, and reproduction in any medium, provided the original author and source are credited.