Current first-line treatments for idiopathic membranous nephropathy often insufficiently reduce proteinuria and creatinine. Additional treatments options are needed for these refractory cases. Herein, we describe the case of a 68-yearold white male with worsening dyspnea and peripheral lower extremity edema with biopsy-proven membranous nephropathy, without any identifiable secondary causes of the disease. He failed to achieve partial or complete remission after initial therapy of enalapril, ato...

This cross-sectional study, comprising of 120 CKD patients, attempted to determine, which of the two equations for estimating GFR, either by serum cystatin-C or by serum creatinine, is better related with lipid profile which is widely portrayed as a cardiovascular risk factor. The parameters evaluated included lipid profile, serum creatinine and serum cystatin-C among others. Staging was done by both the equations (MDRD equation by creatinine and CKD-EPI equation by cystatin-C) and compared, and...

This case report examines two rare mechanisms of acute renal failure in a patient with metastatic melanoma treated with high-dose vitamin C. The first is oxalate nephropathy, which is an uncommon but known complication of highdose vitamin C therapy in naturopathic medicine. The second is due to melanuria and renal melanosis, which has been described in metastatic melanoma; however, acute renal failure requiring renal replacement therapy has not been reported previously. We report a patient with ...

Diabetic nephropathy (DN) has been historically the major cause of kidney disease in diabetic patients. However, recent studies have found a high proportion of diabetic patients with biopsy proven Non-diabetic renal disease (NDRD) or NDRD superimposed on DN. These findings have resurfaced the interest in establishing which of these patients may benefit most from a kidney biopsy. Our study aims to enlighten the prevalence and etiology of biopsy proven NDRD and to explore clinical and morphologic ...

End-stage renal failure has a significant impact on patients’ daily lives, which can be measured by quality of life questionnaires. The objective of this study was to assess the health condition related to quality of life in hemodialysed patients in three semi-urban hospitals of Senegal and to determine the factors associated with it. During an observational, transversal, descriptive and analytical study conducted for 2 months, between March 1st and April 30th, 2016, the patients’ records, i...

Administration of single dose of ferric carboxymaltose (FCM) is useful for both control of anemia in hemodialysis patients and end stage renal disease. Its use in peritoneal dialysis (PD) patients is not as well known. We report our experience of FCM administration in PD patients. PD patients treated with i.v. in the last three years in our unit were analyzed retrospectively. Main reasons for administration of i.v. iron therapy were evaluated. Previously oral iron therapy or erythropoietic stimu...

Transforming growth factor beta1 (TGF-β1) is regarded as the important factor in many fibrotic kidney diseases. Autophagy is a vital mechanism which maintains intracellular homeostasis in eukaryotic cells and involves in various renal physiologic and pathological processes. Current studies indicate that autophagy in renal tubular epithelial cells serves as a renoprotective mechanism which modulates the course of diverse kidney disease....

Fifty years after the creation of the first arteriovenous access, little is known about the deleterious cardiac effects of this pathological circuit. Understanding the pathophysiology of Access Based Cardiac Disease (ABCD) is critical, given the fact that cardiac abnormalities are the leading cause of morbidity and mortality in end stage kidney disease patients on dialysis. However, this has been a challenge, as many of hemodialysis patients have preexisting cardiac disease, they invariably have...

The Assessment of Economic Cost in the Management of Acute Kidney Injury in a Tertiary Hospital in Cameroon: Prospective Cohort Study

Acute kidney injury (AKI) is a medical emergency. It refers to a heterogeneous disorder characterized by an abrupt and usually reversible decrease in kidney function, resulting in the retention of nitrogenous waste products and in the dysregulation of extracellular volume and electrolytes. Its incidence is on the rise in both developed and developing countries, with the condition resulting in high morbi-mortality and economic burden. To determine the average total cost in the management of acute... 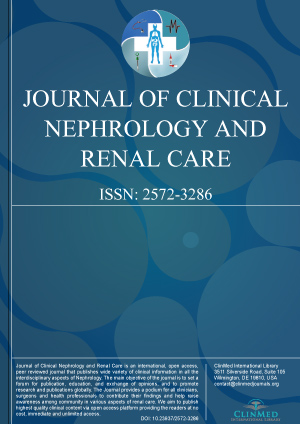