Prevalence of Overweight and Obesity among Intermediate Schools Students in Buraydah, KSA

Obesity is an important public health problem in children and adolescent because of the rapid increase in its prevalence rate and its related co-morbidities.

To estimate the prevalence of overweight and obesity among intermediate school student in Buraydah, aged from 13 to 16 years and to discover the associated risk factors.

A cross-sectional study was carried out in a government school in Buraydah, during academic year 2018-2019. All the study population were subjected to a predesigned questionnaire that included questions related to socio-demographic characteristics, life style (physical activity and eating habits) and anthropometric measurements including height, weight and body mass index.

216 students participated in this study. The prevalence of overweight and obesity was 24.1% and 10.1% respectively. The highest rate of overweight was at the age of 13-14 years. Risk factors of obesity were intake of breakfast and snacks, fast food consumption, > 2 hours per day of screen watching, eating while watching television and low level of physical activity.

Obesity has emerged as an epidemic in many parts of the world. The World Health Organization has warned of the escalating epidemic of obesity that could put the population in many countries at risk of developing non-communicable diseases. Available studies in Eastern Mediterranean countries indicate that obesity has reached an alarming level among both children and adults. Consequently, the incidence of non-communicable diseases is also very high, and represents more than 50% of total causes of death [1]. According to National Health and Nutrition Examination Survey (2011-2014), childhood obesity rates have remained stable for the past decade at around 17 percent for ages 2 to 19. However, these rates are declining among 2 to 5-year-olds, stable among 6 to 11-year-olds, and increasing among 12- to 19-year-olds [2].

The mechanism of obesity development is not fully understood and it is confirmed that obesity occurs when energy intake exceeds energy expenditure. There are multiple etiologies for this imbalance; hence, the rising prevalence of obesity cannot be addressed by a single etiology. Genetic factors influence the susceptibility of a given child to an obesity conducive environment. However, environmental factors, lifestyle preferences, and cultural environment seem to play major roles in the rising prevalence of obesity worldwide [3,4]. In a small number of cases, childhood obesity is due to genes such as leptin deficiency or medical causes such as hypothyroidism and growth hormone deficiency or side effects due to drugs (e.g. steroids) [1].

Overweight and obesity lead to adverse metabolic effects on blood pressure, cholesterol, triglycerides and insulin resistance. Some confusion of the consequences of obesity arise because researchers have used different BMI cut-offs, and because the presence of many medical conditions involved in the development of obesity may confuse the effects of obesity itself. The non-fatal, but debilitating health problems associated with obesity include respiratory difficulties, chronic musculoskeletal problems, skin problems and infertility. The more life-threatening problems fall into four main areas such as CVD problems; conditions associated with insulin resistance such as type 2 diabetes; certain types of cancers, especially the hormonally related and large-bowel cancers; and gallbladder disease [3].

In Saudi Arabia, there is an increasing trend in the prevalence of obesity and overweight, which are the sources of various diseases including hypertension, diabetes, obstructive sleep apnea, CVD etc.

This study focused on prevalence of overweight and obesity among intermediate schools students in Buraydah, KSA.

A cross-sectional study was conducted on a sample of students who attended government schools during the second school academic term. The sampling frame included the listed governmental schools given by Educational Directorate of boridah.

Buraidah is the capital of the Emirate of Qassim in the Kingdom of Saudi Arabia and the largest city of Qassim with a population of over half a million. Buraidah surrounds a range of hills and sandy highlands, including some depressions, which are very fertile agricultural lands because of the easy extraction of water from its surface covered with a layer of limestone and gypsum. It is warm in summer, cold in winter and relatively humid. It dominated by northerly winds that reduce heat in the summer and northeasterly, which works to reduce heat in the winter. The area of Buraidah is currently estimated at about 1,300 square kilometers. The city is famous for agriculture and many farms that produce dates and has a global market for dates trading, where all kinds of dates and is an important place come to the Arabs to buy dates specifically.

The population of this study was all students aged 13- 16-years-old in all schools in Buraiadh Educational Directorates. A cluster random sampling was used. A list of public schools was obtained from the education directorates and clusters were created for each of the Directorate and two schools were selected randomly from each cluster. Finally, three classes from each school were selected randomly.

Two schools were used to collect data for this study. The total sample size was 216 participants aged 13-16 years, based on the following formula: N = [(1.96)2 × pq]/d2, where N = sample size, p = expected prevalence, q = 1-p, d = margin of error. To calculate the 95% confidence interval for an expected prevalence of 25% (based on the average percentage prevalence of overweight and obesity in the world) with a margin of error (d) of not more than 0.03, the required sample size was 800. To cover for nonparticipation, we enlarged the sample as follows:

After obtaining permission from heads of educational directorates, the researcher visited the selected schools to inform them about the survey. All the classes from the first to the third grade in each selected school were included in the study. Systematic randomization was used to select the sample where the students in the middle three desks from each row in each class were selected to give them the consent form (which was approved by the Regional Ethics Committee. Having got the consent from the headmasters and the students, data were collected by using the following tools.

Questionnaire: The contents of the predesigned questionnaire were explained to the students before handling over to them. The questionnaire included items like:

(B) Feeding pattern: Data included the frequency of breakfast intake in a week، and number of meals، eating snacks and fast food consumption.

Prevalence of Overweight and Obesity

Data on BMI showed that 24.1% of the total population sample was underweight, 47.7% normal weight, 18.1% overweight and 10.1% obese. Thus, the overall prevalence of overweight and obesity among these students was 28.2% (Figure 1).

About one-third of the sample (30.0%) reported having a low family income, 46.8% middle income and 23.6% high income. The children's reports of their parents'education level showed that 16.2% of fathers and 25.5% of mothers had an educational level below high school, while 61.6% of the fathers and 55.6% of the mothers had above high-school education. Majority of the fathers had jobs (86.6%) while only 33.3% of the mothers had jobs (Table 1).

Table 2 presents some of the important dietary habits of students in Buraydah. More than half of them (50.2%) reported of taking breakfast sometimes, whereas only 5.1% of them reported that they never took any breakfast. About daily numbers of meals, study showed that above half of respondents (53.7%) were taking three times meal a day. While quarter of them were taken above and less than three time. 73.6% of students, had taken snacks meals sometimes, while 21.3% had taken it in a frequency.

The study demonstrated that more than fifty percent of middle school students have their nutritional behavior towards eating some food and beverages like fast food consumption, sweets intake, carbonated drinking intake and sweet juices drinking, (76.4%, 54.2%, 53.7%, 65.7%) respectively, and they do not tend to eat it permanently or more than once a day while sometimes they do so.While fresh vegetables and fruits were taken irregularly by 46.3% of the students.

Our data displayed that 45.5% of students were watching television more than 2 hours a day. In addition, more than two thirds (67.1%) of the students participating in the study, hadspent more time sitting in front of TV screens and telephones, and eat during this period. The study also shows that two third (65.3%) of students used their private cars to go to school (Table 3).

In Table 5 different variables were tested to determine their effect on BMI including life style factors. Data showed thatspending more time in front of the television and phone screens with eating foods and drinks regularly during this period and using private cars for transportation to school without enough exercisewere strongly significance associated with razing prevalence of overweight and obesity respectively (P value < 0.001, (P value < 0.000).

In the present study, there was a significant association between obesity and excessive use of computer and phone. Viewing computer and phone screens decreases energy disbursement, spending less time on performing physical activity and increases their consumption of obesogenic foods. This is in agreement with the study conducted by Munakata, et al., [16] who confirmed a significant relation between BMI and TV watching in Japan. Our study revealed a significant association with mode of transport for reaching school and obesity. Using own cars to reach school often devoid students of the benefit from walking on foot, physical exercises and energy consumption, which are in agreement with the findings of study by Souza [17].

The prevalence of overweight and obesity among intermediate schools, aged 13-16 years in Buraiyda was relatively high. Breakfast intake, snack intake, fast food consumption. Use of computer and phone, more than two hours per day, and finally physical inactivity showed a strong association with a higher BMI in the students. 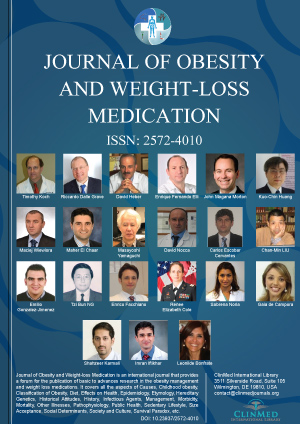 © 2020 Elmanssury AE. This is an open-access article distributed under the terms of the Creative Commons Attribution License, which permits unrestricted use, distribution, and reproduction in any medium, provided the original author and source are credited.