Providing medical care in the days leading up to an event for age group athletes in endurance sports can be challenging in large participant events. Little direction is provided in the medical literature to help prepare one for this task. The objective of the report is to describe our experiences with delivery of care to the United States athletes' preceding and immediately after an International Triathlon Union (ITU) World Triathlon Age Group Championship. This report can guide preparation by medical care providers and race directors by reporting the different characteristics for medical attention and management.

Among the 554 participants in the race, 83 (15.0%) experienced at least one medical problem. Seventy (12.6%) had musculoskeletal injuries, the most common of which were located in the spine and lower extremities. Of the 96 medical conditions, 13 (13.5%) were acute and 83 (86.5%) were chronic. Sixty-three percent of the medical visits occurred 1-2 days prior to the racing event and 30.1% of the patients saw a medical doctor. The most common treatment (82.1%) given was chiropractic manipulation. A small number (13.5%) of the patients required treatment with medications.

15% of age group triathletes participating in a world championship sought medical attention in the week preceding the race. Musculoskeletal injuries were the most common complaint and more than two-thirds of the medical problems were chronic. The majority received treatments from chiropractors. Knowledge of the type of care needed prior to the race provides direction for medical care providers and race directors in determining equipment and staff needed to care for age group triathletes. This information is likely transferrable to other endurance sport age group world championship settings.

Triathletes endure a tremendous amount of stress both physically and mentally in preparation for competition. In triathlons, the athletes compete in running, biking, and swimming in one race under different terrains. Because of the extreme training and strenuous competition, injuries and other medical problems inevitably happen. Medical problems include musculoskeletal injuries, trauma, heat exhaustion, excessive ultraviolet radiation exposure, postural hypotension, gastrointestinal symptoms, bacterial infection, hemolysis, immunosuppression as well as psychological depression [1-4].

Musculoskeletal injuries are the most commonly studied health issues among triathletes. The reported incidence of musculoskeletal injuries in this group ranges from 47% to 50% [5-9]. Burns, et al., found that factors associated with greater risk of overuse injury in triathletes were increase in years of experience, longer distances of training, prior history of injury, and poor periods of warming up and cooling down [6]. In contrast, age and gender did not seem to be risk factors for triathlon injuries [6,9,10].

The medical attention of age-group triathletes preceding world championship events is not detailed in the literature [2]. Because they represent a unique segment of the population, age-group triathletes may have a very different spectrum of health issues when compared to the general population. Directing the medical care for these athletes without this knowledge could otherwise be challenging. The objective of the report is to describe our experiences with delivery of care to the United States athletes during the 2005 International Triathlon Union (ITU) World Triathlon Age Group Championship held in Honolulu, Hawaii. We have also compared it with other studies in the last 2 decades.

This study included the review of all non-emergent medical issues for which care was delivered by the United States of America Triathlon (USAT) medical staff to 554 (327 male and 227 female) triathletes at the Triathlon Age Group Short Course 2005 World Championship in Honolulu, Hawaii leading up to the event. This did not include emergent or urgent issues that were treated in the medical tent the day of the race. The triathlon competition consisted of 10 kilometers running, 40 kilometers cycling, and 1.5 kilometers swimming. The type of medical issues, chronicity of the medical problem, time when the medical issue occurred, type of healthcare providers (i.e., medical doctor or chiropractor, or both), and treatment offered were described. Medical issues were categorized as spine, lower extremity, upper extremity, dermatological, otolaryngologic, pulmonary, or neurological. The chronicity of medical problems was classified as chronic or acute (defined as less than 4 weeks in duration). Time of the occurrence of the medical issue was defined as when the athlete saw a healthcare provider and was recorded as the number of days before the race.

Among the 554 participants in the race, 83 (15.0%) experienced at least one medical problem (Table 1). Of the 83 athletes, 38 (45.8%) were male. Seventy (12.6% of all participating athletes) had musculoskeletal injuries and 26 (4.7% of all participating athletes) had other more general medical problems. The number of medical conditions treated for these triathletes totaled 96 (Table 1). Thirty-two (5.8%) triathletes suffered spine-related injuries, which included neck pain and low back pain. 32 (5.8%) triathletes had medical problems with the lower extremity while 6 (1.1%) had upper extremity conditions. Furthermore, 17 (3.1%) suffered dermatological problems such as heel blisters and feet lacerations. 6 (1.1%) suffered otolaryngologic issues such as upper respiratory infection and sinus congestion. 2 (0.4%) suffered neurological symptoms of headache. 1 (0.2%) suffered pulmonary embolism. Of the 83 athletes who had at least one medical condition, 9 (10.8%) had a combination of one or more medical conditions. Of all the medical problems treated, 13 (13.5%) were acute and 83 (86.5%) were chronic.

There were a total of 165 visits for these medical conditions from 4 days before the racing event to the racing day (Table 2). The majority (63.0%) occurred 1-2 days prior to the racing event. Thirteen (7.9%) presented on race day in an evening clinic following the completion of the event. Twenty-five athletes (30.1%) saw a medical doctor, 49 (59.0%) saw a chiropractor, and 9 (10.8%) saw both (Table 2). The medical staff included both primary care physicians and orthopedic surgeons. In total, 67 treatments were given: 55 (82.1%) were manipulations by chiropractors; 7 (10.4%) were debridements of the skin; four (6.0%) were otolaryngologic/pulmonary treatments, and there was 1 (1.5%) musculoskeletal infection (Table 2). Among 96 cases, 13 (13.5%) were treated with medications: 6 with antibiotics and 7 with pain medications.

Table 2: Medical services and treatments received by triathletes in the study. View Table 2

Triathlon is a sporting activity that combines swimming, cycling, and running into a single event [3,4]. While the number of mass participation sporting events is on the rise, injury data and availability of medical support plans for such events remain underreported [4]. This study determined the rate and scope of medical problems that triathletes experienced leading up to the race at the Triathlon Age Group Short Course World Championship in Honolulu, Hawaii. Unlike prior studies, this report included the non-emergent medical issues that afflict triathletes immediately before the race and the evening after, rather than during the race. Compared to the other studies [5-9], the rate of musculoskeletal injuries of 12.6% was lower, likely the result of the athletes addressing chronic issues in the pre-race setting.

The majority of the musculoskeletal injuries involved the back and lower extremities which is comparable to the results from the literature. Vleck, et al. reported Achilles tendon, lower back, and knee as the most common injuries [11]. Similarly a study in Finland showed that the lower back and knee were the most common areas to be injured [12]. Another study on triathletes who competed in the 1986 Hawaii Ironman Triathlon also showed that the back was the most common anatomic place of injury [13]. Our study reflects that injuries sustained during the race are similar to the musculoskeletal concerns of the athletes leading up to the race.

The majority of the triathletes saw a chiropractor rather than a medical doctor. This is likely due to the fact that the majority of the injuries were chronic musculoskeletal injuries for which chiropractic treatment provided an improved sense of preparation for the race. This is important for the medical care or race director to consider in terms of recruiting the necessary personnel to facilitate the medical needs of the triathlon participants. In addition to medical doctors, chiropractors are key healthcare providers for triathletes. This might be affected by geographic location. For E.g. In a recent study from Korea, the medical support group did not include a chiropractor [4].

Besides the non-emergent medical care needs, two fractures, which included a displaced olecranon and tibial shaft, occurred during the race. Cycling was the most common cause of injury needing transfer to hospital seen in another study in 2017 [4]. The medical staff was involved in facilitating safe transportation and referral for definitive treatment back home for these two athletes. Consideration in preparing the triathlete to obtain definitive care for fractures is essential. This includes organizing comfortable and secure travel home, assistance in timing of any proposed surgery and the expeditious referral to the appropriate treating surgeon.

Fifteen percent of the triathletes sought medical attention in the days leading up to the race and immediately following the race. Musculoskeletal injuries were the most common complaint and more than two-thirds of the medical problems were chronic. The majority received treatments from chiropractors. This study examined the medical needs of age-group triathletes leading up to the race to provide direction for medical care providers and race directors in determining the necessary equipment and staff prior to race day. This information is likely transferrable to other mass participation endurance sporting events with age group athletes.

Financial disclosure statements have been obtained, and no conflicts of interest have been reported by the authors or by any individuals in control of the content of this article. 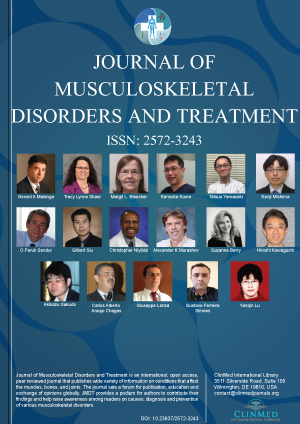 Journal of Musculoskeletal Disorders and Treatment

© 2020 Shilt JS, et al. This is an open-access article distributed under the terms of the Creative Commons Attribution License, which permits unrestricted use, distribution, and reproduction in any medium, provided the original author and source are credited.