Epidemiology of Intestinal Parasitism in Schoolchildren Treated at the Primary Health System. Havana 2020

Among infectious diseases, those caused by intestinal parasites constitute an important health problem for man.

To characterize the intestinal parasitism clinically and epidemiologically in primary school students from Marianao attended in the Primary Health Care, Havana, Cuba.

An observational, descriptive and cross-sectional study was carried out; the universe of study was represented by all schoolchildren from six Primary Schools in Marianao during the period from August 2018 to January 2020 with the clinical and microbiological diagnosis of intestinal parasitosis and they were treated at Five Family Medical Offices.

Among infectious diseases, those caused by intestinal parasites constitute an important health problem for men, mainly in countries with less socioeconomic development. They have high prevalence rates and a wide distribution, and are detected more frequently in tropical and subtropical regions [1].

Intestinal parasitoses harm the economic development of nations and are closely linked with poverty and with the most underprivileged social sectors [2-4].

It is estimated that approximately 3 billion people worldwide are infected by intestinal parasites, both protozoa and helminths, and that about 1.45 billion correspond to helminths; the most prevalent species worldwide are: Ascaris lumbricoides, Trichuris trichiura, Ancylostoma duodenale and Necator americanus. Mortality from intestinal parasites is usually low, however between 3,000 and 65,000 deaths from soil-transmitted helminth infections and 100,000 from amebiasis are reported each year [5].

In Cuba there is government concern to improve the quality of life of the population, through the execution of multiple strategies and through the Ministry of Public Health, for which the country has managed to significantly improve the existing health indicators before 1959. A despite this, various investigations suggest the endemism of intestinal parasitism in rural and mountainous areas of the country [6,7].

The current investigation is carried out with the objective of clinically and epidemiologically characterizing intestinal parasitism in schoolchildren from six Primary Schools of the Marianao Municipality in Havana.

An observational, descriptive and cross-sectional study was carried out in the period from August 2018 to January 2020. The universe of the study is 1295 students from the six selected primary schools, and the sample was all schoolchildren diagnosed with parasitism, that is, 527 belonging to ten Family Medical Offices.

Statistical information was obtained from the records on charge sheets and individual medical records of the patients studied and emptied by the author in a form designed for this purpose.

The variables studied were: Age in years, sex, municipality of origin, reported symptoms, type of parasite identified and risk factors.

The collected data was processed, creating a database through the statistical package SPSS for Windows version 11.5. Absolute frequencies and percentages were used as a summary measure of the information.

Ethical standards regarding the confidentiality of the information obtained were respected.

In Table 1 a greater presence of sex observed female for 51.4% with greater predominance of the age group of 5 to 7 years for 33.8%, followed by schoolchildren between 8 to 9 years with 29.8%.

Table 1: Observations of parasitism according to age and gender. View Table 1

In Figure 1 you can see that the male sex was the most affected by parasitic infestations with 70.5%, while females had a high index but with 62.8%.

Figure 1: Distribution of parasitism according to sex. View Figure 1

In Table 2 and Figure 3 is found that the parasite more isolated in stool samples corresponded to the Giardia lamblia in 52 school for 29.7%, followed by the Enterobius vermicularis with 23.4% and thirdly Entamoeba histolityca with one 14.2%, followed by Trichuris trichiura with 14.4%. In addition to the presence or absence of monoparasitism and polyparasitism, where polyparasitism predominates in both sexes.

Figure 3: Global presence of parasitism according to incidence. View Figure 3

In Figure 4 shows that of the students studied, 75% do not wash their hands, prior to eating food, 67% have Onychophagia followed by inadequate storage of drinking water with 59% having onychophagia or sucking the fingers.

In a study carried out by Escobedo on prevalence and risk factors associated with intestinal parasitism, a close relationship was found with the age of the patients, and a higher incidence is shown in the earliest stages of life. The involvement by sex in the current study was similar to that described for population studies [7].

According to an investigation on factors associated with intestinal parasitism in the municipality of Matanzas, carried out by Dominguez, it can be seen that the prevalence is higher in 2-year-old children with 65.1%, followed by 5-year-old children, with 58.3%. This does not correspond to the current study, however, if it coincides that the male sex is the most affected [8].

Other international studies correspond to the results of this investigation, such as Lacoste in Vegon de Nutrias belonging to Venezuela, Salcedo in six indigenous communities residing in Cali, Colombia; in which the condition in young patients stands out [9-12].

While other authors propose different clinical manifestations to those of the current investigation, Martinez determined that clinical cases with respect to Strongyloides stercoralis are typically manifested by dermatological, pulmonary or gastrointestinal disorders. In Canete, in a study on liver fluke and fasciolosis, fever, abdominal pain, gastrointestinal disorders, hepatosplenomegaly, pain in the right hypochondrium, subxiphoid pain, ascites, icterus, urticaria, subcutaneous nodules and respiratory manifestations [13-19].

In a national survey carried out by Rojas, it is evident that the frequency of infections due to parasitic and commensal species in Cuba decreased over 25 years, it was observed that there was a decrease in the frequencies of infections for all species of soil-transmitted helminths, Trichuris trichiura, Ascaris lumbricoides, Ancylostomideos, and Strongyloides stercoralis. This same decrease in the frequency of infections in 2009 was found with the pathogenic protozoa Giardia lamblia and Entamoeba histolytica/E. disparate, and diners: Endolimax nana and Entamoeba coli. The only intestinal parasite that increased its frequency compared to the 1984 survey was Enterobius vermicularis (known as pinworm) [20].

In a Venezuelan study carried out by Lacoste, [14] given that there was a greater prevalence of infection by protozoa than by helminths, with Endolimax nana as the most prevalent, followed in order of frequency by Blastocystis and Entamoeba coli [14-20].

The study on intestinal parasitism by the author in Venezuela found that there was a predominance of higienico ambientales inadequate habits, of which he stood barefoot walking, equal incidence shown in the previous unwashed food before eating [19,20].

It is concluded that there is a predominance of males, with a higher percentage of patients from rural areas. Digestive symptoms, such as abdominal pain and diarrhea, were the most reported by patients. The Giardia lamblia was the parasite most frequently identified in patients. Bad dietary hygiene habits are the main risk factors.

The author does not refer conflicts of interest. 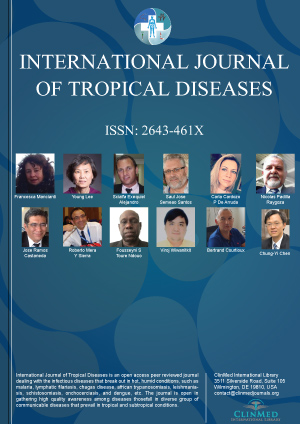 © 2020 Rojas OB. This is an open-access article distributed under the terms of the Creative Commons Attribution License, which permits unrestricted use, distribution, and reproduction in any medium, provided the original author and source are credited.