Surgical Management of an Intrathoracic Desmoid Tumor: A Rare Presentation

Santivañez JJ1*, Diaz A2, Jiménez A3 and García Herreros LG3

Desmoid tumor is a rare connective tissue tumor, accounting for approximately 3.5% of connective tissue tumors and 0.3% of all solid tumors. It can originate in any part of the body; however, we find them more frequently in extremities, thorax and abdomen. True intrathoracic desmoid tumors however (arise within the thoracic cavity) are remarkably rare. The main problem is the ability to continue growing more than in other locations, and the high relapse rates of this tumor. Adequate surgical resection with negative margins is the treatment of choice; however in cases of positive margins, advanced stages of the disease, or in unresectable locations, other therapies are being used. We present a case of a left parietal pleural 22 cm desmoid tumor that occupied the entire left pleural space with severe adhesions, and complete collapse of the lower lobe.

Desmoid tumor is a rare connective tissue tumor, accounting for approximately 3.5% of connective tissue tumors and 0.3% of all solid tumors [1]. It is a benign tumor that originates from deep musculoaponeurotic structures [2]. Distant metastasis from desmoid tumor have not been reported, however they are locally aggressive and associated with high recurrence rates after surgical resection [3]. Desmoid tumors may arise at any site in the body. Between 37-50% arise in the abdominal region, and the most common extra-abdominal sites are chest wall (15%), upper and lower extremities (14%), the shoulder girdle (6%), and inguinal regions (5%) [4,5]. However, true intrathoracic desmoid tumors (within the thoracic cavity) are remarkably rare with very few cases (less than 30 cases) have been reported in the literature.

A 79-year-old non-smoking female patient presented with progressive shortness of breath. The patient had a cerebral meningioma 15 years prior, which was managed surgically, with resulting vocal cord paralysis. The patient had been presenting episodes of broncho-aspiration chronically. A year ago, she was presented with an episode of complicated aspirative pneumonia, and had to be taken to surgery. She underwent left thoracoscopic empyema drainage and decortication. At that time no mass was documented. During her follow-up, a rapidly growing mass was found in her left hemithorax, however, during the following 6 months, the mass ceased growth. A trucut biopsy was performed yielding results compatible with an extra-abdominal fibromatous lesion (desmoid tumor). A follow-up chest X-ray revealed a large left pleural mass (Figure 1). Chest CT showed an 18 × 12 × 12 cm mass extending from the lateral chest wall and occupying the entire left hemithorax (Figure 2). After a ten-day pre-surgical nutritional and physical therapy plan, the patient was taken to surgery. A left thoracotomy approach was chosen along with resection of the 6th rib. Despite significant pleural adhesions, the mass itself was not grown into the chest wall. The tumor arose from the left parietal pleura and compressed the inferior left lobe. The mass was in contact with the pericardium, large vessels, and left upper lobe, however it was removed in its entirety without damaging these structures. When the mass was removed (Figure 3), the left lower lobe was found to be eroded and severely affected, requiring a lobectomy. In addition, given the size of the mass, lysis of the left phrenic nerve was performed to allow left hemidiaphragm elevation. The pathology report showed a desmoid tumor with negative margins. In the postoperative period, the patient had a slow recovery secondary to pneumonia and swallowing difficulty. The patient eventually improved and was later discharged.

Desmoid tumors are rare and heterogeneous neoplasms, approximately 3.7 new cases occur per one million persons per year and it has been strongly associated with trauma, estrogen therapy, familial adenomatous polyposis, and Gardner syndrome [6]. Desmoid tumors can occur anywhere in the body and are generally divided by anatomic designation as extra-abdominal or intra-abdominal. The most common extra-abdominal sites are the shoulders, chest wall and inguinal regions [5], however, true intrathoracic desmoid tumors are very rare and very few reports in the literature are found. Intrapleural desmoid tumors have a similar behavior and characteristics to those that occur in other locations [3]. According to reports in the literature, desmoid tumors can present different rates and growth characteristics, however, when intrathoracic tumors are found, these are able to continue growing more in comparison to other locations, becoming evident and symptomatic when already at a significant size, and presenting with dysphagia or dyspnea secondary to compression of neighboring structures. The main challenge and complexity of this type of tumor is its high regression rate. Treatment should therefore be individualized according to each patient's needs. Adequate surgical resection with negative margins is the treatment of choice [7], however in cases of positive margins, advanced stages of the disease or in unresectable locations, other therapies are being used, such as antihormonal therapy, nonsteroidal anti-inflammatory drugs, radiotherapy, and chemotherapy. These options have shown some benefits in stabilizing the disease, however low incidence of desmoid tumors makes large studies difficult.

It is therefore very important to know this pathology and understand that early diagnosis associated with an adequate surgical approach is the mainstay of treatment. 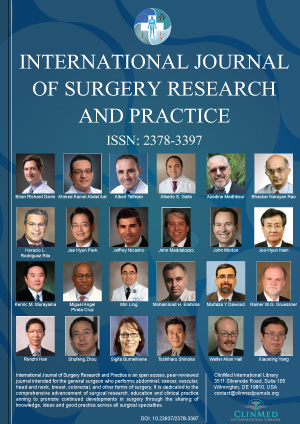 © 2020 Santivañez JJ, et al. This is an open-access article distributed under the terms of the Creative Commons Attribution License, which permits unrestricted use, distribution, and reproduction in any medium, provided the original author and source are credited.