Design developments improved outcomes of total ankle replacement (TAR), but the ankle remains difficult to replace with a prosthesis. The aim of this study is to evaluate short-term results of the Cadence Total Ankle System.

This non-designer case series with our first 11 Cadence TARs shows a high complication rate, which could be caused by factors such as learning curve. However, clinical outcomes are encouraging.

Total ankle replacement (TAR) is one of the surgical treatment options for end-stage ankle osteoarthritis and is gaining popularity since design developments provides improved results. However, despite design developments TAR survivorship is still low compared to total hip and total knee replacement with ten-year survivor rate ranging from 71% to 94% [1-4]. This may be caused by several factors including the ankle joint being difficult to mimic in a prosthesis due to movement in three planes, the constant moving rotational axis in the talus during dorsiflexion-plantarflexion movement, and tibia bone strength rapidly decreasing below the surface [5,6]. Also, the population undergoing TAR is relatively young and ankle osteoarthritis is mostly of secondary origin (i.e. posttraumatic) [3-6].

Furthermore, preoperative coronal plane deformities, common in lateral ligament instability and posttraumatic osteoarthritis, can be challenging to correct. Correction of these deformities is important since it influences the prosthesis survivorship. It can be corrected with techniques such as hindfoot arthrodesis, medial malleolar osteotomy or soft tissue balancing [7,8].

The Cadence Total Ankle System (Figure 1) is a fixed-bearing prosthesis with left and right specific components. The prosthesis is suitable for both primary and revision TAR and can be performed either cemented or cementless. The tibial component consists of titanium alloy and the talus component of cobalt chrome alloy. The insert consists of highly cross-linked ultra-high molecular weight polyethylene (UHMWPE) and comes in three shapes: Neutral, anterior-biased and posterior-biased. The wide sizing range should improve adaptation to individual patient anatomy [22].

All procedures were cementless and were performed in accordance to manufacturer [22] by two surgeons (D.A.V., P.A.N.) with previous experience in TAR surgery. All additional procedures during TAR surgery, reoperations other than revision and revision procedures were registered. Revision was defined as replacement of any component of the implant, including the insert, or removal of the prosthesis and conversion to arthrodesis. Postoperative care consisted of a non-weight bearing short leg cast for two weeks followed by a weight bearing short leg cast for four to six weeks. Follow-up appointments took place at two and six weeks, three and six months and one year.

Intraoperative bone fractures and nerve or tendon laceration were scored as intraoperative complications and thromboembolism, delayed wound healing, infection and heterotopic ossification (HO) as short-term postoperative complications. Delayed wound healing was defined as a wound not closed at the two weeks post-operative appointment and was considered minor if non-operative treatment was necessary and major if surgical treatment was indicated. Infection was considered as superficial if oral antibiotic treatment was necessary, and as deep if intravenous antibiotic therapy and/or surgical treatment was necessary. HO was scored on post-operative radiographs in anterior-posterior (AP) and lateral view and was defined as any new osseous formation in either the medial, lateral, anterior or posterior gutter of the ankle [15].

Clinical outcomes were pain, ROM, clinical ankle alignment and patient satisfaction. Pain was scored on an 11-point pain Numeric Rating Scale (NRS) in which 0 represents no pain and 10 represents the worst pain imaginable and was obtained verbally in the postoperative period. ROM and ankle alignment were clinically determined during physical examination preoperatively and 3-6 months postoperatively. Patient satisfaction was collected from patient records and was scored as three levels: Very satisfied, moderately satisfied or unsatisfied.

Figure 3: (A) Tibiotalar alignment measured with the angle between the mechanical axis of the tibia and a line tangential to the talar dome in pre-operative setting and; (B) The talar component in postoperative setting. View Figure 3

Figure 4: Anteroposterior position of the talus determined with distance x, the distance between the centre of a circle on the talus component in relation to the longitudinal axis of the tibia. View Figure 4

Data was analysed using SPSS version 26.0 (released 2019. Armonk, NY: IBM). Continuous data are presented as means with standard deviations (SD) or as medians with interquartile and categorical data as frequencies with accompanying proportions. The Wilcoxon Singed Ranks tests were used to compare pre- and postoperative outcomes. Results were considered significant if p < 0.5.

During TAR surgery nine patients had 13 additional procedures, most commonly percutaneous Achilles tendon lengthening and osteosynthesis for intraoperative malleolar fractures (Table 2). All patients were discharged one or two days postoperatively. Five patients underwent a total of seven reoperations other than revision (Table 2).

Figure 5: Heterotopic ossification (HO) in the anterior gutter in one of the patients. View Figure 5

Six patients (54.5%) stated to be satisfied, four patients (36.4%) were moderately satisfied with their TAR despite their complications (Table 3). Two patients noticed a clicking sound in their ankle. One patient (9.1%) stated to be unsatisfied due to difficulties walking longer distances.

This study evaluated the short-term outcomes of the Cadence total ankle prosthesis in terms of complications, clinical outcomes and radiological outcomes.

With the first patients, and in a small cohort, introducing a new prosthesis could lead to higher complication rates because of the surgeons learning curve with the new prosthesis design [9-11]. In a similar patient group, Nery, et al. reported 10 complications in 8 patients in a case series with their first 10 HINTEGRA TAR's [26]. Lee, et al. reported a complication rate of 60% in their first 25 cases which decreased to 20% in the following 25 cases [9].

It should be noted that not all radiographs in this study were weight bearing. Non-weight bearing radiographs could influence radiological alignment. Another factor complicating comparison of the results to other studies is the wide variety in alignment measurements and how they are reported (as mean angle, as mean deformity, or as mean varus deformity).

This study has several limitations. Firstly, it is a retrospective study. This means not all data was complete, there were no patient reported outcome measurements (PROMs) available as clinical outcome, there was no preoperative pain score and not all patients had weight bearing radiographs. Secondly, the surgeon learning curve that could be associated with a new prosthesis is of high impact in a small patient group. Another limitation is the short-term follow-up since we focused on intraoperative and short-term postoperative complications, which made it impossible to evaluate some important long-term complications such as cyst formation and radiolucency.

The short-term results of our first eleven Cadence total ankle prostheses showed a high complication rate. More research on this new prosthesis is necessary. Clinical outcomes are encouraging and show low postoperative pain scores, a preservation of ROM, and a good clinical alignment. Radiological alignment was in most cases within normal range. Most importantly, most patients were satisfied with their new ankle.

We believe this case series with the results of our first patients with the Cadence total ankle prosthesis is important as they are the first result of this new prosthesis and they are outcomes by non-designers. These outcomes are important for other surgeons to learn from and to compare their own outcomes too.

The authors declare that there is no conflict of interest. 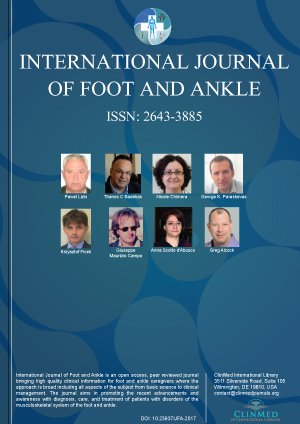 International Journal of Foot and Ankle

© 2020 Brylka EP, et al. This is an open-access article distributed under the terms of the Creative Commons Attribution License, which permits unrestricted use, distribution, and reproduction in any medium, provided the original author and source are credited.