L-PRF Associated With Bio-Oss® As an Optional Treatment for Radicular Cyst: Case Report

In order to regenerate bone and soft tissue, multiples types of treatment were developed including the use of bone grafting, membranes and growth factor/cytokines/host modulating agent. Leukocyte-platelet-rich fibrin (L-PRF) is a second-generation platelet concentrate that forms a natural fibrin matrix with immune regulation node and inflammation retrocontrol proprieties, which can be useful in healing of apical defects.

In the present case, bovine bone substitute graft was associated with L-PRF clot to achieve bone and soft tissue regeneration in a periapical inflammatory lesion. The case developed with a satisfactory bone healing, which suggests that the association of L-PRF and bone grafts may affect positively in the regeneration of bone in wide circumferential apical defects.

Leukocyte-platelet-rich fibrin (L-PRF) is a second-generation platelet concentrate that forms a natural fibrin matrix obtained from the centrifuged blood without addition of anticoagulant or any other gelling agent [1].

L-PRF has been widely used in procedures that demand bone and soft tissue regeneration such as the repair of an alveolar cleft combined with bone particles, in the closure of acute oroantral communication and intraoral bone grafting procedures due it's immune regulation node with inflammation retrocontrol proprieties that are explained by its ability to progressively release inflammation, healing and platelet cytokines during matrix remodeling [2-5]. It also has an osteinductive propriety that is able to stimulate cell migration and proliferation, such as osteoblast, fibroblasts and dental pulp cell which result in an improving healing and regeneration [6].

These studies raised a question that if L-PRF would be useful to help regenerate bone and soft tissue in periapical inflammatory lesions, because in wide circumferential apical defects caused by periapical lesion, the traditional surgical procedure still has a disadvantage of tissue repair, it does not regenerate, meaning that the healing tissue does not fully restore the architecture or the function of the part [7].

The purpose of this article is to report a case of a wide circumferential apical defect caused by periapical lesion, managed by endodontic therapy followed by surgical treatment using bovine bone graft with L-PRF to achieve bone and soft tissue regeneration.

A 54-year-old female patient, without complaints, denied allergies and comorbidities, was referred by the dentist due to a wide maxillary periapical lesion, found in a routine imaging exam. Patient report not have any signs or symptoms of the injury.

Clinically there was no phlogistic signs and ortopantographics revealed an apical radiolucency with a well-circumscribed sclerotic border in the apical region of the right canine and right maxillary (Figure 1).

Endodontic treatment of the right canine and lateral incisor maxillary followed by surgical treatment using of bovine bone graft with L-PRF was proposed.

Surgical treatment was performed under local anesthesia. The cystic capsule was totally removed and sent for histopathological examination. An apicectomy was performed in both teeth involved. A 10 ml of blood sample were taken from the patient without using anticoagulant in a tube and was centrifuged in an IntraSpin® system (German) at 2700 rpm for 12 minutes according to the PRF protocol. The endodontic defect was filled with Geistlich Bio-Oss® spongious bone substitute (Switzerland), covered with L-PRF clot (Figure 2).

Figure 2: After the cyst enucleation filling the defect with L-PRF and Bioss. View Figure 2

The patient evolved uneventfully and was followed up for 2 years with controlled imaging exams showing satisfactory bone healing (Figure 3).

Regular endodontic therapy usually has a satisfactory outcome in most cases of radicular cyst, however for wide circumferential apical defects it might be inadequate due to the disadvantage of tissue repair, it does not regenerate, meaning that the healing tissue does not fully restore the architecture or the function of the part [7].

In order to regenerate bone and soft tissue, multiples types of treatment were developed including the use of used bone grafting, membranes and growth factor/cytokines/host modulating agent. The use of bone grafts aims to facilitate or initiate bone healing and is available in several forms such as autogenous grafts, allografts, xenografts and synthetic grafts [7].

The Bio-Oss, been a bovine xenograft, has the advantage of acting as a scaffold on which host bone might grow. Taschieri, et al. studied the outcome of periradicular surgery with and without guilded tissue regenetion associated with anorganic bovine bone and showed that its use may positively affect the healing process [9]. In the present case, Geistlich Bio-Oss® spongious bone substitute (Switzerland) was associated with L-PRF clot to achieve bone and soft tissue regeneration.

Tatullo, et al. investigated clinically and histologically, the potential use of PRF associated with Bio-Oss as grafting materials in pre-implantology sinus grafting of severe maxillary atrophy as reconstructive material. Sixty patients with major atrophies were recruited and divided in two groups, one group were used only deproteinizes Bio-Oss group, and the other PRF associated with Bio-Oss. This research showed that PRF associated Bio-Oss reduced the healing time, favoring optimal bone regeneration and after 106 days, it is already possible to achieve good primary stability of endosseous implants [10].

Zhao, et al. published a report of two cases in which it was used L-PRF and bioactive glass for management of a wide radicular cyst, in both cases nonsurgical endodontic retreatment was performed, first followed by surgical treatment totally removing the cystic capsule, filling the defect with bioactive glass and covering with L-PRF clot. Both cases showed satisfactory healing of the periapical pathosis and it positively influenced the apical osseous tissue [11].

Zhao's cases are very similar to the present case, and showed similar outcomes, which suggest that the association of L-PRF and bone grafts may affect positively in the regeneration of bone and soft tissue. However, it is not widely documented in literature, so further researches should be conducted to determine its effectiveness.

In order to regenerate bone and soft tissue, studies have shown successful outcomes with bone grafting such as xenograft and allograft and the use of L-PRF clot. In the present case, Geistlich Bio-Oss® spongious bone substitute (Switzerland) was associated with L-PRF clot to achieve bone and soft tissue regeneration with a positive outcome, which suggests that the association of L-PRF and bone grafts may affect positively in the regeneration of bone in wide circumferential apical defects.

Any conflict of interest statement(s), disclosure(s), and/or financial support information, including donations NONE. 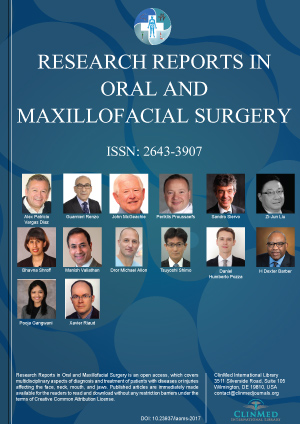 © 2020 Araujo AF, et al. This is an open-access article distributed under the terms of the Creative Commons Attribution License, which permits unrestricted use, distribution, and reproduction in any medium, provided the original author and source are credited.