Hypertension is a global menace contributing to a significant morbidity and mortality numbers; over a billion people across the globe are living with hypertension and over a tenth of the global annual mortality is attributable to the disease [1,2]. Hypertension is also commonly regarded has a silent killer due to its asymptomatic nature at the early stages, by the time symptoms appear the cardiovascular system must have been subjected to consequential damage [3]. Due to the detrimental impact of non-communicable diseases like hypertension, global leaders representing all 194 WHO member states set a target for a 25% relative reduction in the prevalence of hypertension by 2025 [4].

The study was carried out in Abimbola, a rural village located in Ayedaade Local Government Area (7°19'N4°21'E/7.317°N4.350°E), Osun State in the Southwestern region of Nigeria. Ayedaade is situated in the northern area of Gbogan town, which is surrounded by Isokan, Irewole and Aiyedire to the east and Ife north to the west. It consists of over 50 districts and villages, including Abimbola community where this study was conducted. There are around 70 households in the village, with a population of about 500. The people belong to the Yoruba speaking tribe and the predominant occupation of the people were farming and trading. A medical outreach was conducted in the community by trained medical practitioners under the auspices of an Non-Governmental Organization (Livingstone Explorers Initiative) for three days. Figure 1 shows the Map of Ayedaade LGA [20].

The sample size was estimated using the Taro Yamane formula with 95% confidence level:

1. Only adults over the age of 18 years were allowed to be enrolled into the study.

2. Only permanent residents of Abimbola village were allowed to participate in the study.

1. Individuals with debilitating illnesses were not enrolled into the study.

A health check-up service by qualified trained medical and public health practitioners was conducted in a temporary out-patient clinic for a period of three days. Data were collected using standardized case forms that captured the study variables. Data obtained include socio-demographic characteristics, weight, and systolic and diastolic blood pressure. The weight was recorded in kilograms to the nearest 0.1 kg using a weighing scale.

The participants were allowed to rest at least for 15 minutes in a sitting position then blood pressure was measured using Aneroid mercury sphygmomanometer and 3 M Littmann classic II SE stethoscope. Weights of the participants were measured by an Analog weighing scale. The scale was placed on a smooth and flat surface.

Data was only obtained from case notes of selected respondents who voluntarily agreed to participate in the study and also fit the inclusion-exclusion criteria. Not all that visited the clinic participated in the study but selected participants (138) undergo all health check-up tests according to their requirements.

The data collected for the study were analyzed using the Statistical Package for Social Sciences (SPSS), version 20. Descriptive analysis was conducted to derive the frequencies and proportions the respondents' socio-demographic characteristics. Inferential statistics like the independent t-test, ANOVA and Chi-square test statistics were used to derive associations between selected variables at 0.05 level of significance. Since the blood pressure readings were taken at a cross-section, the blood pressure status of the respondents is subject to confirmation.

The recorded blood pressure values of the participants were classified into four [21];

Permission to conduct the medical outreach and report some of the findings was obtained from the village leaders and every single respondent. Verbal consent was received from each of the 138 adult respondents. The respondents were guaranteed utmost confidentiality of data; their names were excluded from all the instruments. No undue compensation was given to any of the respondents as a reward for joining the study. All the respondents were treated with dignity and respect. Ethical approval could not be obtained from a research ethics board due to three reasons: the brevity of the medical outreach, poor road accessibility from the distant village to the State capital and the long duration required to process the approval (about 3 months).

Structures for Blood Pressure (B.P) monitoring and control within the village

There were no laid structures for monitoring and controlling the prevalence of hypertension in the village. The village was void a functional primary health care centre and pharmacy. There was no way for the villagers to monitor their blood pressure or access drug services within the village, even at a fee. Due to how distant the community was to an urban center, accessing basic health treatment was quite hurdle.

The respondents had a mean systolic blood pressure (SBP) of 122.12 ± 28.27 mmHg, while the mean diastolic blood pressure (DBP) was 70.45 ± 14.71 mmHg. Furthermore, there was a 26.8% prevalence of hypertension among the villagers, of which 43.2% of them had both hypertensive SBP and DBP. Figure 2 shows the proportion of male and female respondents within the various BP groups. The prevalence of hypertension among men was 20.8%, while the prevalence among women was 30.0%.

Table 5: Association between respondents' occupation and their average BP and weight. View Table 5

Routine monitoring of the blood pressure is integral to early detection of hypertension and effective management of the ailment. The lack of primary health care centers or other health monitoring structures in the study location made it impossible for the locals to be aware of their health status or to manage the ailment effectively. Without proper measures in place for hypertension screening in rural areas, early diagnosis becomes a challenge [16]. There have been reports that majority of the interventions being put in place to reduce the prevalence and manage hypertension are focused on urban areas, thereby contributing to the high prevalence of hypertension being detected in the rural areas [18,19]. A survey conducted by Atinyi, et al. [19] to assess the prevalence and awareness of hypertension among rural and urban communities revealed that the rural dwellers had a higher prevalence of hypertension because they had a lower level of awareness and more limited control measures compared to the urban dwellers. Another study comparing hypertension in rural and urban communities in Madagascar revealed that hypertension was notably prevalent in both areas, however, it was significantly less treated in the rural areas due to low level of awareness and unavailability health centers or basic instruments like sphygmomanometer [22].

A limitation in this study was that the blood pressure readings were only collected one time due the conditions surrounding the outreach. However, as recommended by the American Heart Association, subsequent readings were collected at intervals for respondents that recorded high SBP and/or high DBP in order to verify the result [23].

It has become established that hypertension is prevalent in both rural and urban areas, with some situations of higher prevalence in the rural areas. Therefore, it is paramount for developing countries like Nigeria to begin channeling resources to these areas in a bid to effectively tackle the havoc caused by high blood pressure. The absence of screening materials as basic as sphygmomanometer in rural areas makes it impossible for blood pressure screening and monitoring. The global target of achieving a 25% deduction in the prevalence of hypertension by 2025 will be unachievable if the rural dwellers do not gain access to basic health services, instead the rural-urban health inequality gap would have widened even further.

This study just like similar studies in the past has refreshed our awareness about the prevalence of hypertension in rural communities. It is recommended that all Federal and State Governments, Non-governmental organizations, and private organizations support the Local Government by providing necessary resources required for effective health monitoring and management. Health policies must also be put in place to available antihypertensive drugs accessible and affordable to rural dwellers. Health promotion through campaigns and advocacy at grassroots level are also required to improve the health seeking behaviour of rural dwellers.

This study was supported by Living Stone Explorers, Nigeria. The authors of this research paper would like to appreciate everyone who participated in this study in one way or the other. 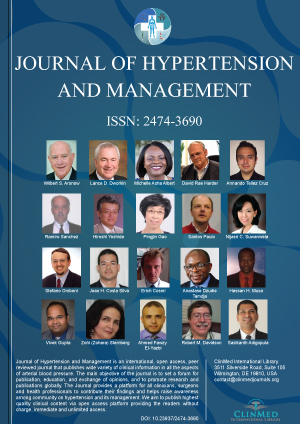 © 2020 Wada OZ, et al. This is an open-access article distributed under the terms of the Creative Commons Attribution License, which permits unrestricted use, distribution, and reproduction in any medium, provided the original author and source are credited.