Isolated renal mucormycosis is rarely reported in immunocompetent individuals. It carries a grave prognosis and the diagnosis is often achieved post-mortem. We report the case of a 22-year-old immunocompetent gentleman who presented with fever, abdominal pain and renal failure. He was managed with antibiotics, Amphotericin-B and underwent nephrectomy, with a favourable outcome. The case emphasizes that isolated renal mucormycosis may affect immunocompetent individuals. The aggressive nature of disease necessitates a high index of suspicion; and that prompt treatment should be initiated.

Mucormycosis is an opportunistic fungal infection that rarely occurs in immunocompetent individuals. The predisposing conditions are diabetes mellitus, transplant recipients, malignancy, malnutrition, and penetrating skin wounds. It has also been reported in intravenous drug abusers [1]. The common forms of mucormycosis are: Rhinocerebral, pulmonary, gastrointestinal, cutaneous and disseminated. Few Indian authors have described isolated renal involvement in immunocompetent individuals [1]. Renal involvement is seen in approximately 20% of those individuals who have disseminated disease, while isolated renal involvement has been rarely reported in China and India [2,3]. We report here a case of isolated renal mucormycosis in young male with no known co-morbidities.

A 27-year-old male presented with fever and chills, since four days; followed by pain over the right flank, which radiated to the anterior abdomen. There was no dysuria, haematuria, lithuria, gravelurea; or history of passage of any fleshy material in the urine. Furthermore, there was no history of reduction in the urine output nor similar complaints in the past. He looked clinically unwell. He had tachycardia with a pulse rate of 120/minute, with a normal blood pressure and respiratory rate. His temperature was 38 ℃, weight was 68 kg and a BMI of 22.6 kg/m2. A systemic examination revealed tenderness and guarding in the right upper quadrant. A clinical diagnosis of acute right sided pyelonephritis was considered. Investigations revealed a haemoglobin of 13.1 gm/dL (normal range: 12 gm/dL to 16 gm/dL); and a white cell count of 15000/mm3 (normal range: 4000/mm3 to 11000/mm3), with polymorphs of 73%, lymphocytes of 22% and eosinophils of 03%. Urine analysis showed the urine to be positive for leucocyte esterase. BUN was 19 mg/dL (normal range 15 mg/dL to 40 mg/dL), serum creatinine 1.02 mg/dL (normal range 0.6 mg/dL to 1.4 mg/dl), blood sugar fasting and post-prandial were 80 mg/dL and 103 mg/dL respectively, serum bilirubin was 0.4 mg/dL, serum albumin 4.2 gm/dL, serum AST/ALT was 19/22 IU/L. HIV, HBsAg, anti-HCV were non-reactive. His blood, urine were sterile, chest X-ray was normal, 2D echocardiography did not reveal any vegetation, serum procalcitonin was 0.6; and his serum beta galactomannan was 0.34 (Normal < 0.50). Ultrasound of the kidneys revealed an enlarged right kidney and a hypoechoic lesion in the inferior pole of right kidney. Contrast-enhanced computerised tomography (CECT) of the kidney, ureter and bladder (KUB) conducted on day two, revealed bulky right kidney with perinephric fat stranding and hypodense areas in the inferior and interpolar regions of the right kidney along with thickening of lateroconal and Zuckerkandl's fascia (Figure 1). The hypodense area in the inferior pole had sharply demarcated wedge shaped appearance with a possibility of an abscess or infarct (Figure1). The contrast excretion was delayed in the right kidney. A differential diagnosis of acute pyelonephritis with an abscess in the right kidney was initially considered and the patient was started on Injectable Meropenem and Teicoplanin. However, in view of presence of wedge shaped hypodensity and a differential of renal infarction, possibility of vasculitis was also considered. Clinically a repeat examination revealed similar findings and ocular fundi, was normal. The patient had a downhill course with persistence of high grade fevers and by day six of the illness, developed features of acute kidney injury. Investigations revealed BUN of 53 mg/dL, serum creatinine of 3.1 mg/dL, ANA was negative, Anti PR3 and Anti MPO titres were within normal range. Repeat urine analysis showed traces of blood and positive leucocyte esterase. An interventional radiology consult was taken for aspiration of abscess and 10 cc of thick necrotic material was aspirated from the right kidney. Histopathological examination revealed on Hematoxylin and eosin (H&E) stain, a thin walled, broad, aseptate, folded fungal hyphae with wide angle branching in a necrotic mixed inflammatory background along with infiltration and disruption of the vessel wall leading to tissue necrosis (Figure 2). Periodic acid schiff (PAS) stain and Grocott stain revealed wide angle branching fungal hyphae on a necrotic background along with large areas of infarction (Figure 3 and Figure 4), confirming Mucormycosis. The patient was started on injection Liposomal Amphotericin at 05 mg/kg body weight. A repeat clinical examination to search for a primary source in the nasal sinuses and lungs was negative. A repeat non-contrast CT scan (NCCT) revealed presence of thickening of the right pelvicalyceal system along with hypodense lesions over the right kidney. He had persistent fever and worsening metabolic parameters with progressive renal dysfunction. Investigations revealed BUN of 61 mg/dL and serum creatinine of 5.3 mg/dL. He underwent right nephrectomy in view of deteriorating clinical condition with a prophylactic left Double J stent placement. On macroscopy the right kidney appeared enlarged with presence of multiple thick walled abscesses and necrotic material within. Post-nephrectomy, he developed oligoanuric renal failure and was managed with continuation of Injection Liposomal Amphotericin-B for a total dose of 3.0 gm, broad spectrum antibiotics, ventilatory support and hemodialysis; and gradually improved. Further investigations for an underlying immunodeficiency state with immunoglobulin profile, Nitro blue tetrazolium test, T and B Lymphocyte counts and NK cell counts were normal for age. Flow cytometry for specific Interleukins was not performed. The nephrectomy specimen of the removed kidney showed an enlarged right kidney with multiple abscesses on the external surface (Figure 5). Final culture grew Rhizomes species of the order Mucorales. Post-nephrectomy and after one week of therapy, the patient showed clinical improvement with resolution of fever and improvement in his renal function. He was subsequently continued on oral Posaconazole for three months; and on follow up had a serum creatinine of 1.4 mg/dL to 1.5 mg/dL.

Figure 5: Multiple abscesses (largest: 2 cm × 1.5 cm) on the surface of the kidney in the nephrectomy specimen. View Figure 5

Mucormycosis is a deadly infection caused by filamentous fungi belonging to the order Mucorales, primarily belonging to Rhizopus and Mucor species [4,5]. Renal involvement in Mucormycosis is seen in 20% of disseminated cases [3,5]. Isolated renal involvement with no underlying conditions has been infrequently reported from India and China [2,3]. It can present in two different forms; In acute presentation with fever, acute kidney injury and features of sepsis where the histopathological lesions show hemorrhagic infarcts, coagulation necrosis, angioinvasion and infiltration by neutrophils. The chronic forms present as an indolent illness with presence of a mass in the abdomen and is histopathologically characterized by granulomatous inflammation with presence of giant cells [2,6]. Management of the acute variety has been with nephrectomy followed by Injectable Liposomal Amphotericin, while the indolent variety can be managed with local infiltration with Injectable Liposomal Amphotericin and surgical debridement [2,6]. The likely source is either an ascending infections from the urinary tract or a seeding from a distant pulmonary source [7]. The pathogenesis in immunocompetent individuals is not known and is possibly linked to impaired macrophage function and phagocytosis. In a retrospective analysis of ten renal mucormycosis patients from a tertiary care centre in North India; there was 50% mortality [7]. Local instillation of Liposomal Amphotericin was successful in those cases where there was only pelviclyceal system involvement [7,8]. In a patient with clinical diagnosis of acute pyelonephritis and radiological features suggestive of a focal abscess in the form of wedge shaped areas appearing like infarcts, delayed contrast uptake with negative cultures, mucormycosis should be thought of early on [9]. Early processing for histopathology of the aspirated material may yield a diagnosis and treatment would entail early debridement and long term Amphotericin. In our case timely percutaneous aspiration yielded the histological diagnosis with the characteristic finding of broad hyphae which branch irregularly at right angles [9]. Our patient had radiological features to suggest involvement of right kidney; with fat stranding, appearance of wedge shaped area in the inferior polar region and a delayed nephrostogram; a thorough search for a systemic source was negative. He had clinical deterioration and underwent urgent nephrectomy of the right kidney. A prophylactic DJ stent was placed by the urologist due to bulky appearance of the left kidney though radiologically there was no evidence of involvement of the contralateral kidney; which was later removed. An attempt was made to find the immune status of the patient with his peripheral B, T and NK cell count and immunoglobulin profile, which was normal. The European confederation of medical mycology guidelines of Mucormycosis recommend treatment with surgical debridement and injectable Liposomal Amphotericin [2]. It is known that Mucorales are resistant to Echinocandins and Azoles barring Posaconazole and Isavuconazole. Posaconazole in high dose 800 mg/day can be used as a salvage therapy with 60% success rate [2,3]. Our patient received injection Liposomal Amphotericin for a cumulative dose of 03 grams and only after clinical improvement was shifted to oral posaconazole following which he had a favourable outcome. There are important learning points from our case. The more common causes of non-responding pyelonephritis are generally obstructive like stone, sloughed papilla, blood clots or intraluminal tumors. Fungal infections as an important cause are generally considered in immunocompromised persons [10,11]. In a clinical scenario of non-responding pyelonephritis who has been treated and evaluated logically, a change of management plan is required early on. The presence of focal hypodense lesions should entail an early intervention for a histological diagnosis, and a differential diagnosis of angio-invasive fungal infections like Mucormycosis should also be considered, even in immune-competent individuals. More detailed studies though are required to evaluate for occult immunodeficiency state.

Isolated renal mucormycosis in immunocompetent individuals is a rare infection with devastating outcomes. Early diagnosis, surgical debridement and injectable Liposomal Amphotericin are the cornerstone of therapy. This case reiterates the treatment efficacy of the above approach with emphasis on early histological diagnosis in non-resolving pyelonephritis. 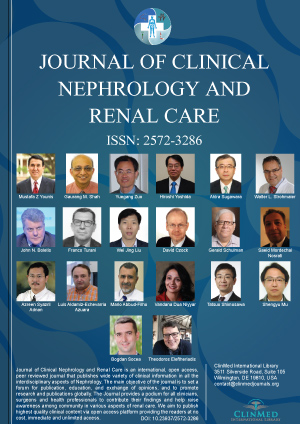 © 2020 Katyal A, et al. This is an open-access article distributed under the terms of the Creative Commons Attribution License, which permits unrestricted use, distribution, and reproduction in any medium, provided the original author and source are credited.