Aims and background: Our objective was to analyze the clinical and demographic characteristics of children with B-cell lymphoma treated in a single center over the last two decades. Methods: Data was collected by a retrospective review of the charts of all 76 patients treated to our unit, from 1990 to 2010, with FAB LMB 89, 96 protocols and 2003 modifications....

Fetal and neonatal alloimmune thrombocytopenia (F/NAIT), caused by fetomaternal mismatch for human platelet (PLT) alloantigens (HPAs), is the commonest cause of severe thrombocytopenia in term neonates and is analogous to the fetal/neonatal anaemia caused by haemolytic disease of the newborn (HDN). The most feared complication of this syndrome is the occurrence of intracranial hemorrhage leading to death or neurological sequels....

The Comparison between Microhematocrit and Automated Methods for Hematocrit Determination

Hematocrit is a test that measures a percentage of blood that is comprised of red blood cell. This is often referred to as packed cell volume (PCV) or erythrocyte volume fraction. It is considered as an integral part of a person's complete blood count, along with hemoglobin concentration, white blood cell count and platelet counts....

We report a case of Zieve's syndrome in a patient with a longstanding history of alcohol abuse admitted for acute alcoholic hepatitis. Zieve's syndrome is defied as the triad of hemolytic anemia, hypertriglyceridemia, and jaundice in patients with known liver disease. It is an uncommon diagnosis, but is an important one to consider in patients with known liver disease admitted with these constellation of signs and symptoms....

Adult T-cell Leukemia/Lymphoma (ATLL) is resistant to chemotherapy and the acute and lymphomatous subtypes of disease have a dismal prognosis. There is no standard therapy for relapsed or refractory disease in Western countries and new agents are being explored. Lenalidomide is an immunomodulatory agent with promising activity in hematologic malignancies, including non-Hodgkin's lymphoma and represents a novel therapeutic option. ...

The Use of Diffusion Weighted Imaging in the Diagnosis of Intraocular Relapse of Acute Lymphoblastic Leukemia: A Case Report

Intraocular relapse of Acute Lymphoblastic Leukemia (ALL) is rare. Prompt diagnosis and treatment can minimize vision loss. We report a case of a young girl diagnosed with pre-B ALL who was initially treated successfully with chemotherapy....

Hemoglobin (Hgb) measurement is an important risk-stratification tool for patients presenting to the Emergency Department with vaso-occlusive crisis (VOC) from sickle cell disease (SCD). Point-of- care (POC) Hgb testing such as the HemoCue device decreases time to identification of significant anemia. However, there are no studies evaluating the accuracy of HemoCue testing in patients with SCD and VOC. The purpose of this study was to evaluate the correlation of Hgb measurements from HemoCue com...

The aim of this research is to study the mechanism of action of the newly synthesized substance - Thiazoline Ammonium 4-Chlorophenyl-2-Hydroxy-4-Oxo-2-Butenoate (FS-169), which possesses the direct anticoagulant activity. The research was conducted with the use of 'АPG4-02-P' coagulometer. For the purposes of the study the rabbit plasma was used. The results show that FS-169 effectively changes Partial thromboplastin time and prothrombin time indicators. However, FS-169 has no influence on...

A Case of Localized Neuroblastoma in Caffey Disease, with Early and Uncommon Progression

Background: Caffey disease is a rare syndrome caused by mutation in the alpha-1 collagen type I gene, not described in literature as a predisposing condition to cancer development. Observation: We report a case of a 6-years-old female diagnosed with Caffey disease that developed a localized neuroblastoma. The patient had a poor clinical and radiological response with unusual disease dissemination and progression until death. Conclusion: The case is a rare example of rapid progression of localize... 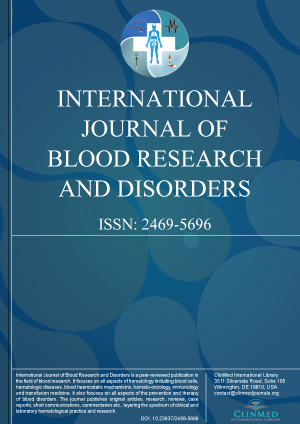