Comparative Effectiveness of Single-Dose of Fosfomycin vs. Cefoxitin Plus Ciprofloxacin as A Prophylaxis to Prevent Transrectal Prostate Biopsy Complications

The antibiotic prophylaxis for prostate biopsy is not well established, usually is based on fluoroquinolones, but there is an increase of resistance. We explore the efficacy of Fosfomycin trometamol in comparison with ciprofloxacin plus cefoxitin as prophilaxis of this procedure. A total of 432 transrectal ultrasound guided prostate biopsies were performed: 241 patients received prophylaxis with cefoxitin 2 g i.v. 1 hour before the procedure combined with ciprofloxacin 750 mg p.o. 1 hour before ...

Vaginal Erosion of the TVT Band: Bimodal Management Including the Contribution of Coelioscopy

It’s about a 63-year-old patient who had benefited of a tension-free vaginal tape for stress incontinence at the age of 41. The procedure resulted in vaginal wall erosion revealed by repeated urinary tract infections, suspected by a digital per-rectal examination and confirmed by under-valve examination. The total removal of the strip was performed vaginally and laparoscopically. The post-operative course was simple. The sub-urethral sling (SUB) is a commonly used therapeutic device in urology...

Juvenile Gangrenous Vasculitis of the Scrotum: A Case to Consider

Juvenile gangrenous vasculitis of the scrotum is a rare entity that appears in young men, characteristically after an infection of the upper respiratory tract. We present the case of a 27-year-old male patient who presented with fever and scrotal ulcer after pharyngotonsillar symptoms. The differential diagnosis with other entities that present with scrotal ulcer is proposed, including Fournier’s gangrene and vascular ulcer secondary to infection by the SARS-CoV-2 virus. Juvenile gangrenous va...

Massive Hematuria in the Heterozygous Sickle Cell Disease: A Report of Two Cases

Hematuria in patient with sickle cell disease (SCD) results from microthrombotic infarction in the vasa recta and peritubular capillaries of the renal medullar, with extravasation of blood in the collecting tubes. These were 2 patients with heterozygous SCD with highly abundant macroscopic hematuria. The patients were 23 and 31 and had a clotting total hematuria. They were both anemic with good renal function. Cystoscopy had found bleeding from the left kidney in both patients. Uro-tomodensitome... 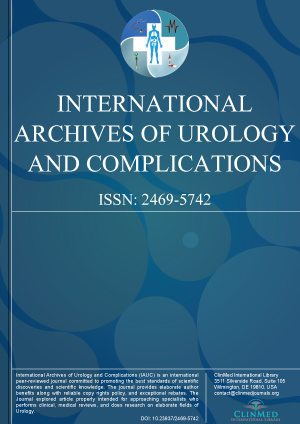